They won't be making any more of these

Grateful Dead Tickets - well If the band remains retired after this weekends concerts in Chicago then yes there will never be another Grateful Dead ticket printed. 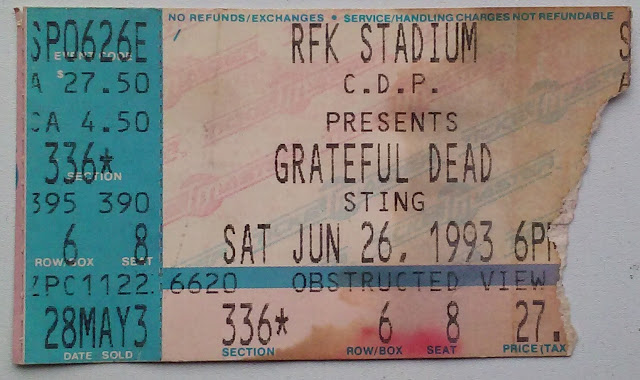 I don't remember much of the show, fortunately we have the tremendous Live Music Archive so we can look back at these shows from over 20 years ago.  Looking back at the set list provided, I vaguely recall the 2nd set opener Iko Iko and the closing numbers. I also remember Bruce Hornsby being with the band and that being a big deal.

I love the fact that Sting is the opener. Can't imagine Mr Gordon Sumner has been the undercard more than a handful of times in the last 35 years.

Note the seat is Obstructed View, of course as you may be aware this means nothing at a dead show. We spent the entirety of the day on the floor at RFK.

This is a ticket from later in 1993. I saw Jerry Garcia Band twice, and preferred them to seeing the Dead. I have only run into my sister by accident once and it was at one of the two JGB shows I saw at the Spectrum. I distinctly remember the first set from this show and much of the latter - The Set list can be found here. 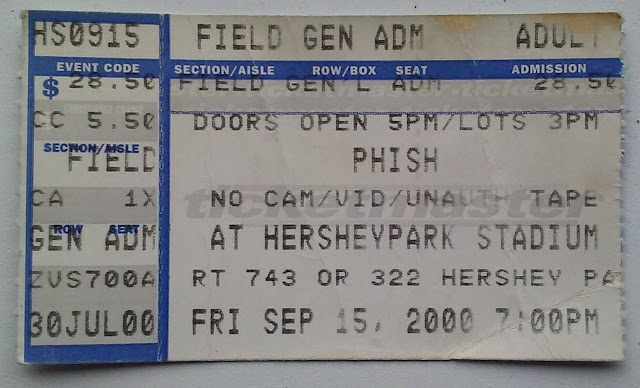 And one more ticket stub related to this past weekends festivities in Chicago. Trey Anastasio from Phish joined the Grateful Dead for their final shows this during the past week. I was fortunate to see his band play at HersheyPark Stadium 15 years ago.  I didn't know much about Phish's music at the time, but I am glad I saw them - They put on a fun show and I met some great folks.

I think you've inspired me. I'll have to share my tickets