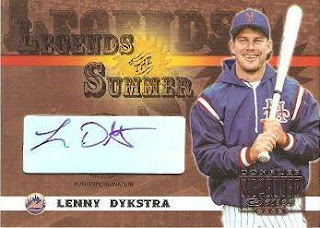 This is a Mets Lenny Dykstra autograph, which is perhaps as it should be. Dykstra won a World Series with the Mets, he only played in a Series with the Phillies. The 93 post season is definitely significant in the Dykstra legend - Between the NLCS and World Series Dykstra hit 6 home runs. For his Career Dykstra hit .312 in the post season including 10 Homers in a mere 112 At Bats.
Dykstra is a fan favorite in both New York and Philly due to his well earned reputation as a hard-nosed player. His career ended somewhat prematurely due to injuries at the age of 33 - although a high $$$ contract and the financial stakes of both Dykstra and the Phillies were probably also factors.

Another aspect of Lenny Dykstra's personality is that he is a man who has been known to enjoy a drink or two. For this reason I chose Lenny to represent STS! with the New Year's Eve holiday looming.
Dykstra can also help to serve as a warning too. In May of 1992 Dykstra was involved in a nasty car accident while driving home from a bachelor party for teammate John Kruk. Another Phillie Darren Daulton was injured in the crash. There are countless examples of athletes, celebrities, and our friends, relatives, and neighbors all being affected by mishaps that involve drunk driving, yet we as a society have not learned much from these examples. Everyone enjoy your New Year's Eve, but also do your part to be safe and not endanger yourself or the lives ot others.
Many folks know that Dykstra has parlayed his baseball celebrity into a successful stock/business venture and currently writes a column for the street.com. Dykstra's son Cutter was recently drafted by the Milwaukee Brewers and I think he has a card in either Razor or Donruss Threads.
Oh and here is a short article that appeared in the Onion referencing Lenny Dykstra. FYI - the Javier/Searcy trade really did happen, but the PTBNL was not Dykstra, it was Julio Peguero, who never did play for the Dodgers major leage club.

Once again PTBNL was the first reader in with the correct answer good for a Pat Burrell Double - His last AtBat as a Phil no doubt. The bonus question is still open until after the Rose Bowl. I am accepting entries for the bonus question here until 11:00 AM (eastern) on January 1st 2009.

PTBNL - repsresentin those Fightin Phillies - 4 Runs - Burrell on 2nd. For those of you keeping score at home, I missed one of PTBNL's runs last week and had initially stated he only had 3 runs - this has been corrected.

For further information regarding the Phungo Spot the Sig! contest click here and join the party - you just may find yourself with a stack of cards come spring training!
Posted by deal at 12:35 PM

I've been to two autograph sessions where Lenny was signing. Each time he had the longest line of people paying to get his signature. He was cool with everyone each time.

In my opinion, Lenny's lead-off HR in Game 3 of the 1986 World Series changed the direction of that series.