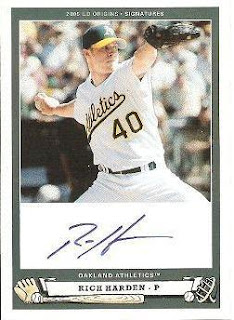 
Once again PTBNL took the Spot the Sig! and plates another run. And after scoring a run last week, Night Owl Cards (toon expert) got right back on base by getting the Bonus Question. I suspect PTBNL got this one by combing Ebay for guys with the initials RH as it took him three hours to find this one - much longer than the 5 and 10 minutes he has needed the last few weeks.

This is the Rich Harden Card. I suppose I wouldn't say it is a beautiful signature. The UD Origins Autos have are fairly plain looking cards, but the auto is on card which is a bonus. The Auto is clean and distinct, but yes getting Rich Harden out of basically two letter is pretty tough. I think I picked this card up off Ebay porbably under $5 including shipping. Pitchers Autos tend to go cheaper than hitters. Harden may not be an ace, but he is a solid #2 pitcher who was the 2nd biggest name among pitchers to change teams during the season. I am sure the Cubbies are hoping for a lot of innings out of the oft-injured Harden this year, If he pitches well they should compete again this season. The fact that Harden now pitches for the Cubs may also give this card some added cache.
The current STS! standings after 1 inning.

For further information regarding the Phungo Spot the Sig! contest click here and join the party - you just may find yourself with a stack of cards come spring training!
Posted by deal at 8:49 PM

I didn't get home from work until after midnight, so I didn't get a chance to get it right away. I found it pretty easily on ebay after I saw it.

I think now's the proper time to say if I blow this four run first inning lead, I'm walking back to Pittsburgh.

I hope somebody gets that reference.