Tonight the ALCS makes the move to Kansas City for Geme 3. To mark the occasion we will discuss a favorite card of Adam Jones from the 2013 Topps Chase it Down Insert set 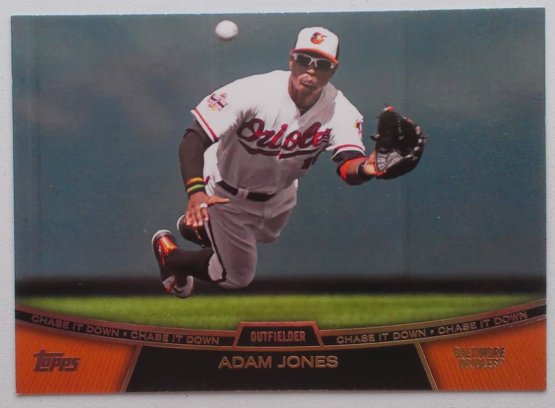 Chase it Down is a 15 card insert set in 2013 Topps Series 2 that is dedicated to fielding excellence  or noteworthy fielding plays. The above card notes a play that Adam Jones Made versus the Rays on September 13 2012. The details are given on the b-side of the card. 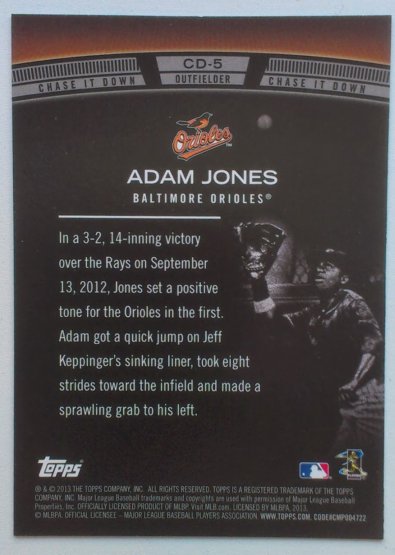 The above text has a nice description of Jones' play, the trouble is the information doesn't correlate  with the related box score which is here.

Not sure what happened here. According to Baseball-ref Jeff Keppinger didn't bat in the first inning of the game referenced. Keppinger did record two F8 ABs. the first was in the 4th and appears to match the description on the card from B-R

I could see the card copy not bothering to mention the SF portion of the play, as it didn't fit the desired narrative. At the time the run gave the Rays a 1-0 lead, but the catch helped prevent a big inning.

Keppinger also had an F8 in the 9th but it is listed as Deep Center.

He did have an F8 in the first inning of the previous game, but once again it was listed a deep fly out. His only other first inning AB in the series resulted in a ground out.

Who is the Image on the B-Side?

I don't think that the photo on the flip side of the card is of Adam Jones.  The image is on all 15 of the Chase it Down cards. It is hard to tell, but it appears that the player is possibly wearing a Twins cap. That leads me to think it may be Denard Span from his Twins days. Any ideas out there?

Part of the reason I went into so much detail about the card is pure narcissism. The game referenced is one that team Phungo attended. 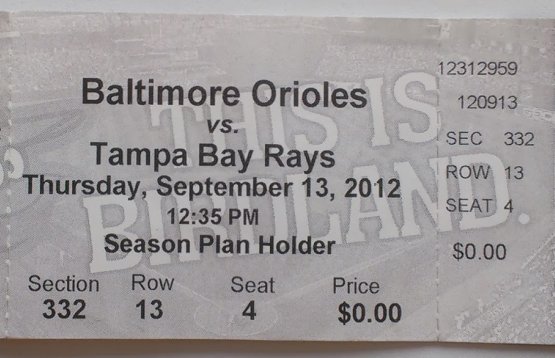 Yep Team Phungo was there for this one so the above Chasing it Down card is part of the very special Phungo in Attendance Binder. I am adding an Index for these cards and plan on trying to get to some of these during the off-season.

Yes it is Thanks!