Scott Eyre made a nice career out of being a Left Handed relief pitcher. He spent 13 years in the majors, the last two with the Phillies. He was a member of 3 different Pennant Winners including the Phillies 2008 World Championship team as well as the 2009 Phils squad – his final major league action was in Game 6 versus the Yankees. His 24 postseasom appearances is pretty impressive and includes Games 3 and 4 of the 2008 Series, both of which were won by the Phillies. 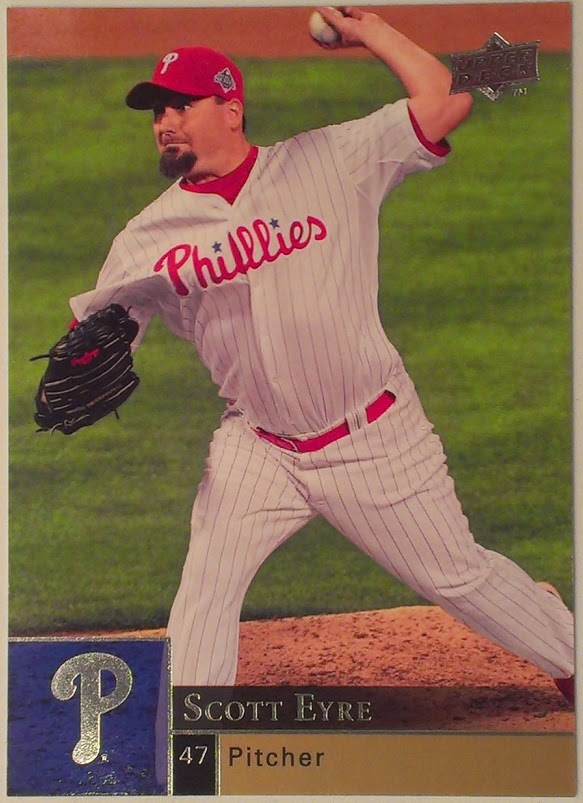 
Since we are In the middle of a World Series involving the San Francisco Giants, we must note Eyre’s tenure with the Giants which ran from 2002-2005. That 3 year window was the pivot point for his career. He went from being a mediocre swing man to a lefty specialist.
As a member of the 2002 World Series Team and did pitch to a single batter in the 7th inning of the Series’ fateful game 6. The Giants had a 5 run lead with 9 outs to go to Win that series, but It wasn’t going to happen. The Giants gave up 3 runs in the 6th and 3 more in the 7th and lost the game 6-5. Eyre pitched in the 7th and while his batter didn’t plate a run or score himself by failing to retire Adam Kennedy, Eyre may have thrown the bullpen off center for the balance of the game.

2009 Upper Deck
Like this card because it shows Eyre wearing a 2008 World Series Cap. Eyre is wearing a home jersey, therefore the photo was taken during either game 3 or game 4 of the 08 Series. Which means it was taken 6 years ago on this Upcoming Sunday(25th) or Monday (26th).

One minor note on 2009 UD, I am not sure why but nobody ever complains about Upper Decks use of foil. Perhaps it is executed better, but I am not sure that is true. The above photo is actually more readable than the scan.


YES – Member of the 2008 Phillies World Champions, It’s My Vote so I will vote for whomever I want.