The 2014 MLB season is drawing to a close and it is time for us baseball fans to face the fact that the long winter and baseball offseaason is nearly upon us. We here at Team Phungo hope to keep the baseball spirit going with a couple of different features. We still need to finish up our 1964 Phillies retrospective, There are a bunch of 2015 HoF candidates I would like to get to and the 1959 Baseball Thrills Subset coverage remains unfinished.

Along with those unfinished items, I would also like to revisit a series we only got four players into in 2014.  Our look at the current Phillies ball club which we dubbed Phillies 2014+ 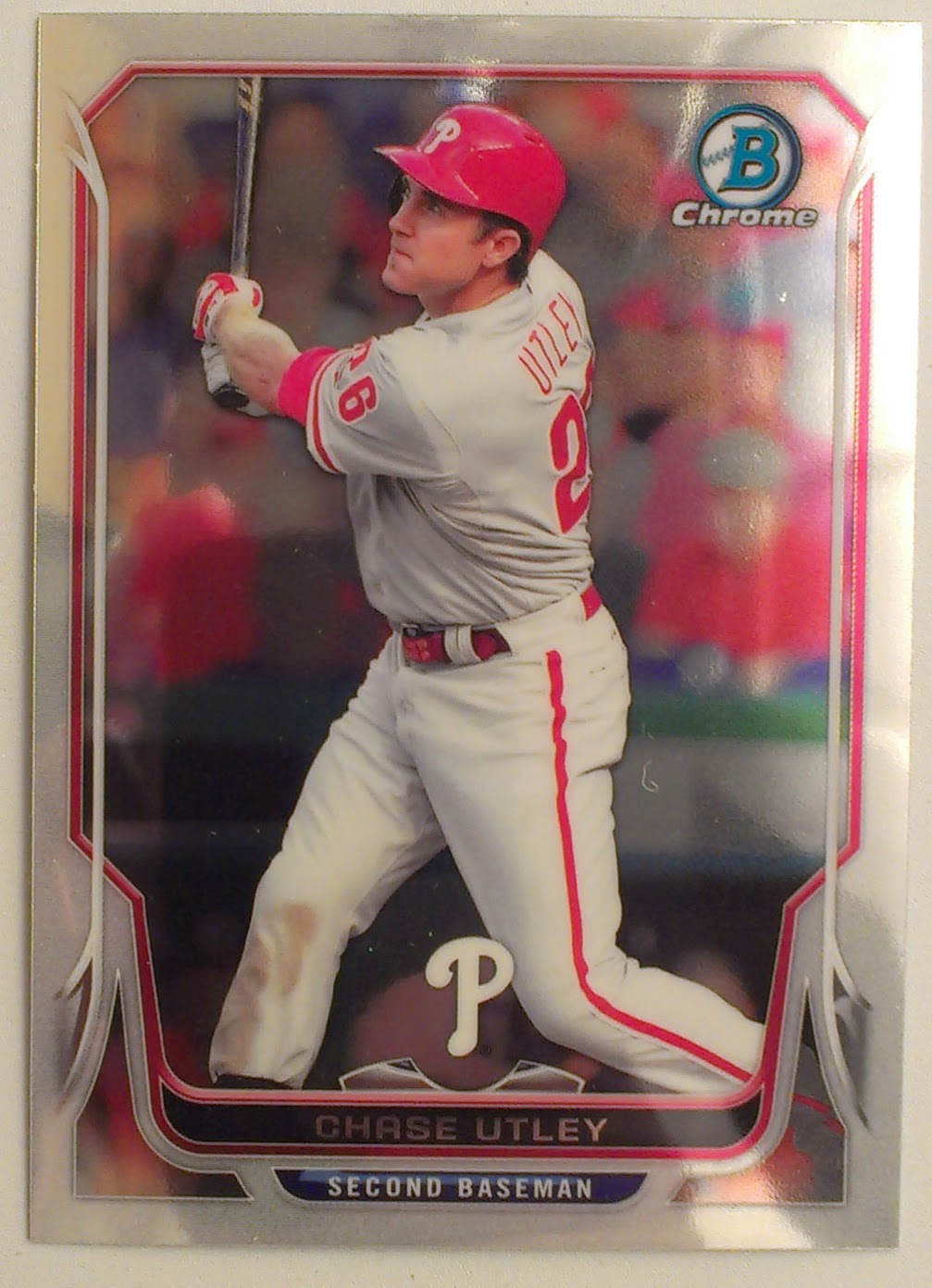 The goal was to project the Phillies Win total by accumulating the rosters WAR totals. I also figured that in addition to gauging our predictions it would give us a chance to examine and consider todays players.

2014 Utley -A tale of Two Seasons
Chase Utley was an All-Star in 2014 and he earned that distinction with a solid two months of play at the beginning of the season. Utley was so good in early 2014 that he had reestablished himself as a potential future Hall of Fame candidate.

To project WAR I am going to take a look at the players similarity scores and attempt to figure out how they apply to their upcoming season.

For Chase Utley's 9 of his age 35 comps our beyond their age 36 seasons. Seven of those 9 actually played at age 36. Based on that number Utley has a 78% chance if returning in 2015.  Unfortunately Utley's two biggest comps Hall of Famer Joe Gordon and the more contemporary Nomar Garciaparra never played beyond their age 35 season. That is a very sobering thought for Utley Fans.

A much happier comp, who I always return to for Chase Utley is Jeff Kent. I like it because 1) Kent played until he was 40 2) He made the postseason 3 different times at age 36+ 3) He appeared on "Survivor" after he retired. As an aside I will note that I would prefer that Chase and Jen Utley appear on "the Amazing Race" over "Survivor" but I would watch either one.

In reality I don't see it.

In his favor Utley is coming off his best season since 2011 - His 3.6 WAR at age 35 was better than all 9 of his comps including Kent.

The flip side to that is that Kent, Vinnay Catilla, and Bobby Grich are the 3 of the 9 comps to have 2.0+ WAR seasons a age 36. Jeff Kent is the only one of the three to have a mentionable career beyond 36.

I give Chsse Utley a 3.0 WAR in 2015. That puts him right between Castilla and Grich.

2014 Bowman Chrome
This year BowChro is debuting special backs that carry a visual representation of a players performance.  I felt as though this would be a fun card to post as we go all in for the analytics. 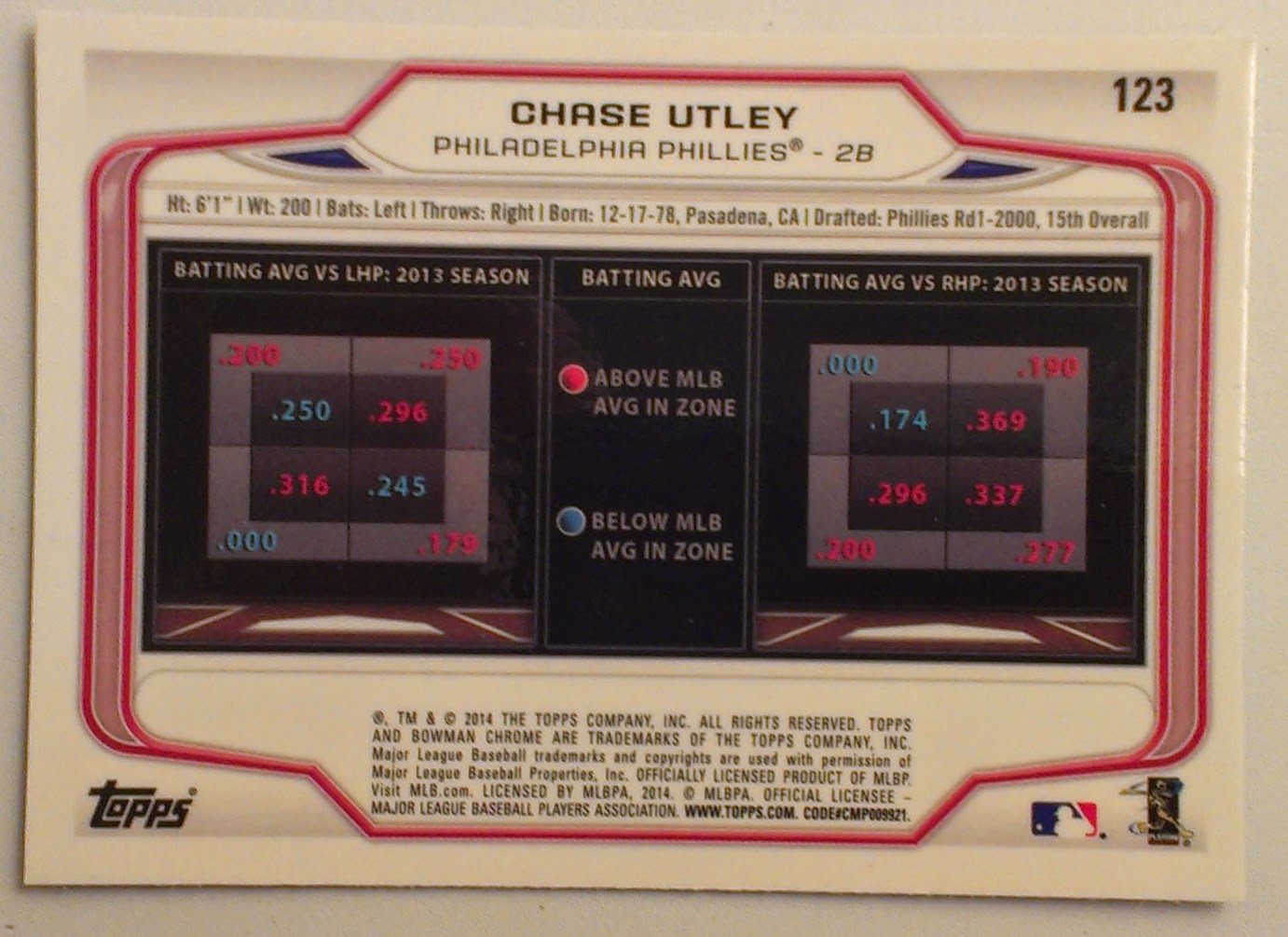 There it is stay off Low and inside to a lefthander. Utley also likes the High and outside pitch and pretty much anything low versus righties.

This is one of three back styles I have seen in 2014 BowChro. The pitchers have location graphs, while some hitters have spray charters.

Phillie 2015+
I will be keeping running track of the 2015 Phillies projected Win total as we analyze the roster. A link to those totals is here.