The World Series starts Tonight in Kansas City. During the series we have scheduled a couple of team related postings for the Royals and Giants. Tonight we open with a great Royals card from the past -  Tom "Flash" Gordon 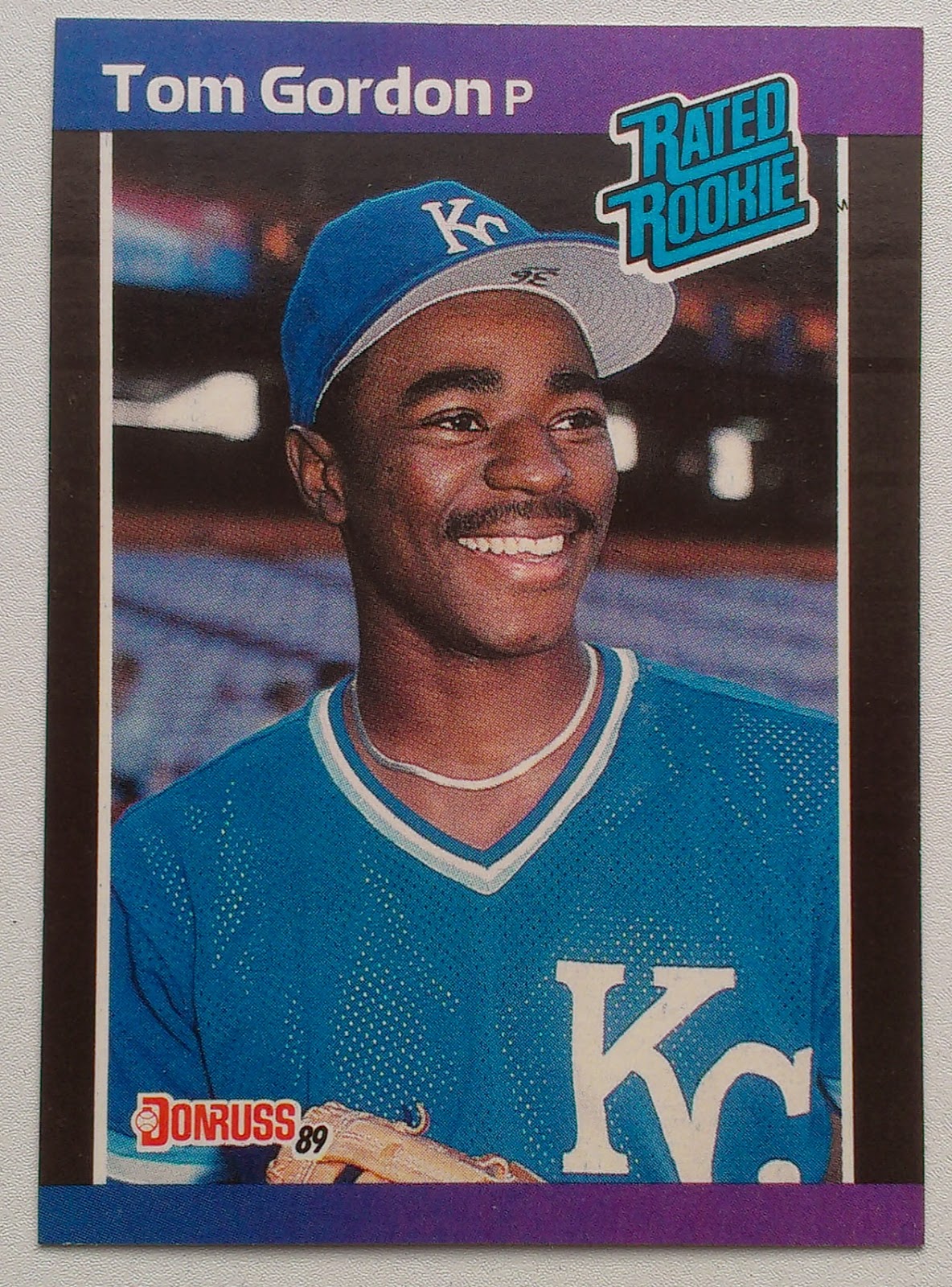 How great of card is this. The Royals Blue, the great big smile on young Tom Gordon, The Rated Rookie Logo. For me the icing is Gordon's uniform number '36' on the cap.

Tom Gordon spent the first eight years of his career as a Royal, the bulk of that was as a swing man.  He did have 16 starts and an impressive 17 wins (combined starts and relief). It was good enough to place Gordon 2nd in the 1989 Rookie of the year voting behind Gregg Olson (27 Saves, 1.69 ERA)

He didn't become a closer until age 30 (in 1998) when he took over the role for the first time as a member of the Red Sox. He led the league with 46 saves and made his first of 3 all-star teams.

Phillies fans remember Gordon for his three seasons he spent with the club near the end of his career. In 2006 he closed out 34 games for the Phils and made his final all-star team. Gordon was a member of the 2008 World Champion Phillies, but did not pitch after July 5th and was not involved in the postseason. He was part of the 2007 NLDS squad and did get involved in two games versus the Rockies.

1989 Donruss Rated Rookies
Rated Rookies is a 20 card subset of 1989 Donruss that runs from #28-47. Thirteen of the 20 cards are considered Rookie Cards including Tom Gordon above. The most significant RCs of the Rated Rookies are Ken Griffey Jr (#33), Randy Johnson(#42), and Gary Sheffield(#31). Ron Jones (#40) is the Phillies rep in the Rated Rookie 20, The subset also includes 1993 team member David West and Free Agent bust Greg Jeffries.

2015 Hall of Fame Candidate
Yes Flash is on the 2015 HoF Ballot and as part of our candidates series I will check my Tom Gordon vote as a YES. Some folks may question this vote as Gordon was a good player with a long career, but they haven't factored in my affection for the Steven King Novella "The Girl Who Love Tom Gordon". For his tenure with the Phillies and for being named in a Steven King title Tom Gordon gets one HoF vote from Team Phungo