It is time to dial up some Oriole Magic.

The O's are facing elimination versus the Royals today and we are calling on some divine intervention from the Hall of Fame. 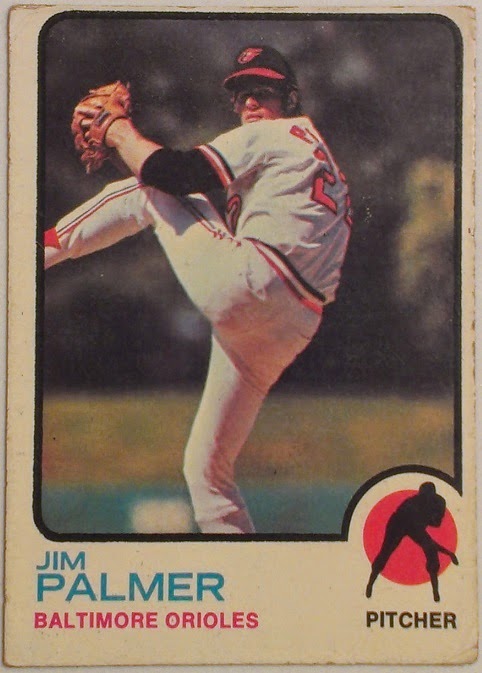 Jim Palmer turns 69 today, and for me there would be no better way for him to celebrate then to see his bubble gum card on Phungo - well that and and an Orioles Victory.

Palmer was a member of three different Orioles World Championship squads in 3 different decades, 1966, 1970, and 1983 (versus the Phillies). He also took home 3 Cy Young Awards (1973, 1975, and 1976). In 1973 his performance was good enough to place him 2nd in the MVP award voting behind only Reggie Jackson. Note: in 1975 Palmer's teammate Bobby Grich, Bert Blyleven, John Hiller and Gaylord Perry all had higher WAR numbers then Reggie Among Pitchers Palmer finished 5th.

Among HoF pitchers Palmer ranks 35th in career WAR (69.4) just a tick below the average of  the 59 pitchers in the Hall. Among contemporary pitchers Palmer's WAR  compares closely to John Smoltz (69.5).

The Cartoon on the back of this card mentions that Palmer won a sports car in a golf tournament. In today's era of multimillion dollar contracts for the mediocre players that seems truly passe, yet I am pretty sure a new car remains the award for the World Series MVP

1973 Topps Jim Palmer
The late Chris Stufflestreet dedicated a posting to the above Jim Palmer card as part of his 1973 Topps Series. Definteily check it out, anything written by Chris is worth reading - He mentions how the 1973T card displays Palmer's distinctive high leg kick and also goes into some greated detail on Palmer's career highlights.