I picked up a blaster of 2014T Chrome a couple of weeks ago, immediate remorse. $20 for 32 cards that I have basically already seen.


I got one Phillies card which is the average in a 30 card break and it was a good one, so I can't complain. Bummed to see Chase occupying a lowly common number here but other than that very happy to pick up this card.

I didn't have this card from flagship so I hadn't really taken a close look at it prior - I am going to dedicate an entire posting to this card at some point in the future, but For now I will just reiterate that I am really glad it is now in the Phungo Collection.

My first 2014 Tanaka card. An obvious +1 for this blaster, nice to get one of the key 2014 rookies.  I also have it on the Phungo agenda to discuss Mr Tanaka's cards in a future post. Who knows if we will get to it.

Presenting Mr Flores with his base card and power play parallel. Shin-Soo Choo was in 2014 Topps earlier this year as a member of his former team.

The Refractors specify "Refractor" in the bottom right corner (above the Topps Logo). I think they have only done this the last couple of years, but they don't bother distinguishing between the vanilla refractors, rainbows, or x-fractors - Romero is an x-fractor while the other two are the commons.

Blasters include 4-pack of parallels. Pence and a Rookie Card, highlight the "bonus" pack. 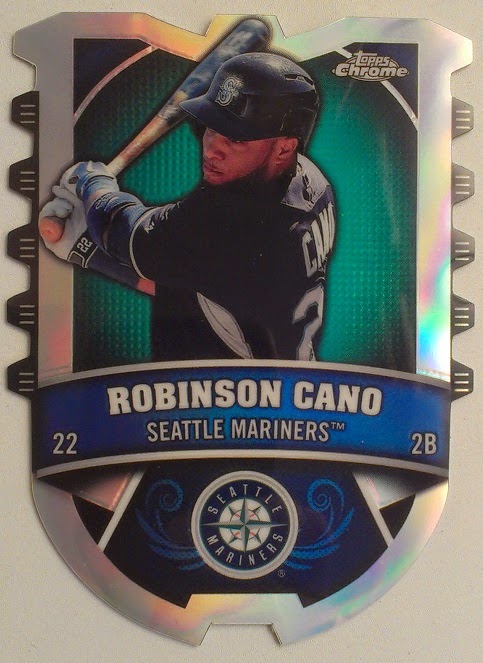 Here we have whatever these are - these puzzle piece cards seem more suited for opening day. I can see a lot of dealers wanting to figure out ways to put these cards together. 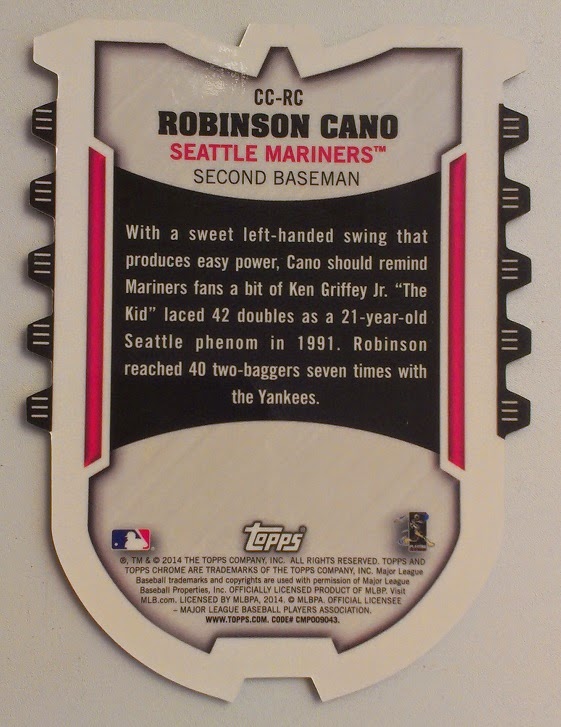 
The Chrome Connections card runs off and makes a comparison to Junior. For those of you who are interested Ken Griffey Jr WAR through age 31 season was 78.0. Robinson Cano 51.5

As usual Chromes late season release date allows for a good mix of rookies. The Ryu isn't a RC but I included it here for the Rookie Cup.

After opening a blaster of Topps Chrome, I was reminded why I am a flagship collector. $20 for 32 cards is just out of my league - For me Chrome is a Chuck-It, A Blaster is more than I really am interested in, one of those 3 packs with a "Bonus" pack of parallels is probably more my speed.

There is an argument for chrome, the cards are nice and sturdy. the shiny works over the white borders. The checker for Chrome may also be better. Chrome gleans the top talent and rookies which are probably the most interesting subjects from the collects S1 and S2 sets

My friends and I have been debating about opening a box. The price keeps coming down, but it is very feast or famine this year. The color refractors are very tough to find this year.

The Price point of Chrome keeps me off building a set. but I do like the mix of Vets and Prospects in a set.

I usually just buy a base set of Chrome for about the price of a blaster and a couple of single packs. I miss out on all the colorful hits, but the odds of me pulling a Refractor of a guy I collect are pretty low.

The only time I ever get Topps Chrome is if the cards show up in a repack, grab bag or team trade lot. I can't justify the price point.