This weeks early Spot the Sig! entry should prove a little tougher than last weeks and is good for a Triple. 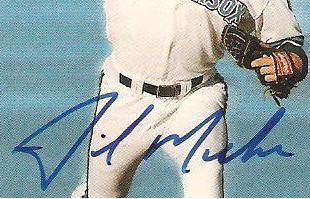 And I decided to move up the STS! this week because there is apparently some football game going on tomorrow, and I didn't want to interfere with anyone's game or party plans.
It also gives me an opportunity to ask this Bonus Question. What will the final score for the Superbowl be? A walk or Stolen Base goes to whoever picks closest to the Cardinals Score and the Steelers Score. So I will award two bonuses, 1 each for Cards and Steelers - Simply specify your guess as something like Cardinals 47 Steelers 3.
And a second bonus question is What songs will Bruce Springsteen perform during the SuperBowl Halftime show? Each team can pick 5 Bruce Songs. Whoever gets the most songs wins a bonus of a single.
So yes we have a lot of bases on the table this week a triple for the auto, SBs for the two SuperBowl scores, and a Single for the Springsteen Bonus. I will close bonus Question guesses at 3pm on Sunday (Eastern).

The current STS! standings going into the fifth inning:

For further information regarding the Phungo Spot the Sig! contest click here and join the party - you just may find yourself with a stack of cards come spring training!
Posted by deal at 9:26 PM

Email ThisBlogThis!Share to TwitterShare to FacebookShare to Pinterest
Labels: Spot The Sig, STS

That looks like it says Gil Meche, but something tells me that'd be too easy!

I'm lousy at this game, but maybe I can get on base thanks to the Super Bowl.

Songs from The Boss: The Rising, Glory Days, Dancing in the Dark, Tenth Avenue Freeze Out, Waiting on a Sunny Day (I know he's going to sing one of songs on his current album, but I don't know what those songs are).

Songs:
The Rising
My Lucky Day
No Surrender
Pink Cadillac
Born to Run

Damn, I hate being in college when these things are on Saturday night. Maybe I can steal home on saying that it's a 1998 Best Aquasox card of Gil Meche.

If not, I'll go 28 Arizona, 20 Pittsburgh and the following Springsteen songs. I have no idea what he'll actually sing, so I'll go with my personal choices that wouldn't bring down the Tampa fans

Well done, FanofReds. I thought this would be a tougher mostly because Meche is off toiling around in KC, but apparently it wasn't too bad.

Nice collection of songs guessed for the Springsteen Q. And we have a split on the Cards and Steelers. Hope this keeps the gm interesting for any of you folks that don't have a stake in the game.

Sorry for the late response. Just got back from a mini vaca. I am happy report that a good time was had by all.

DayF and Night Owl both get Steelers Bonus.

10th Avenue Freeze Out, Born to Run, Working on a Dream, and Glory Days

Night Owl Gets the Springsteen Bonus by naming two songs.

I will sort this all out Monday or Tuesday FanOfReds, Night Owl, and Cardboard Junkie all appear to have scored runs.

pretty busy week on the basepaths. Congrats all.