Knocking out another one of the 1959 Topps Baseball Thrills tonight. Despite Colavito's status as a loved Hall of Very Good player, this is one of the weaker cards in the Baseball Thrills subset. While the pix on the front does demonstrate some action especially with the young fan going for the ball, overall I find it a somewhat dull. Beyond my issues with the photo on the front the flip side goes into a lot of detail regarding the catch while giving it absolutely no frame of reference. 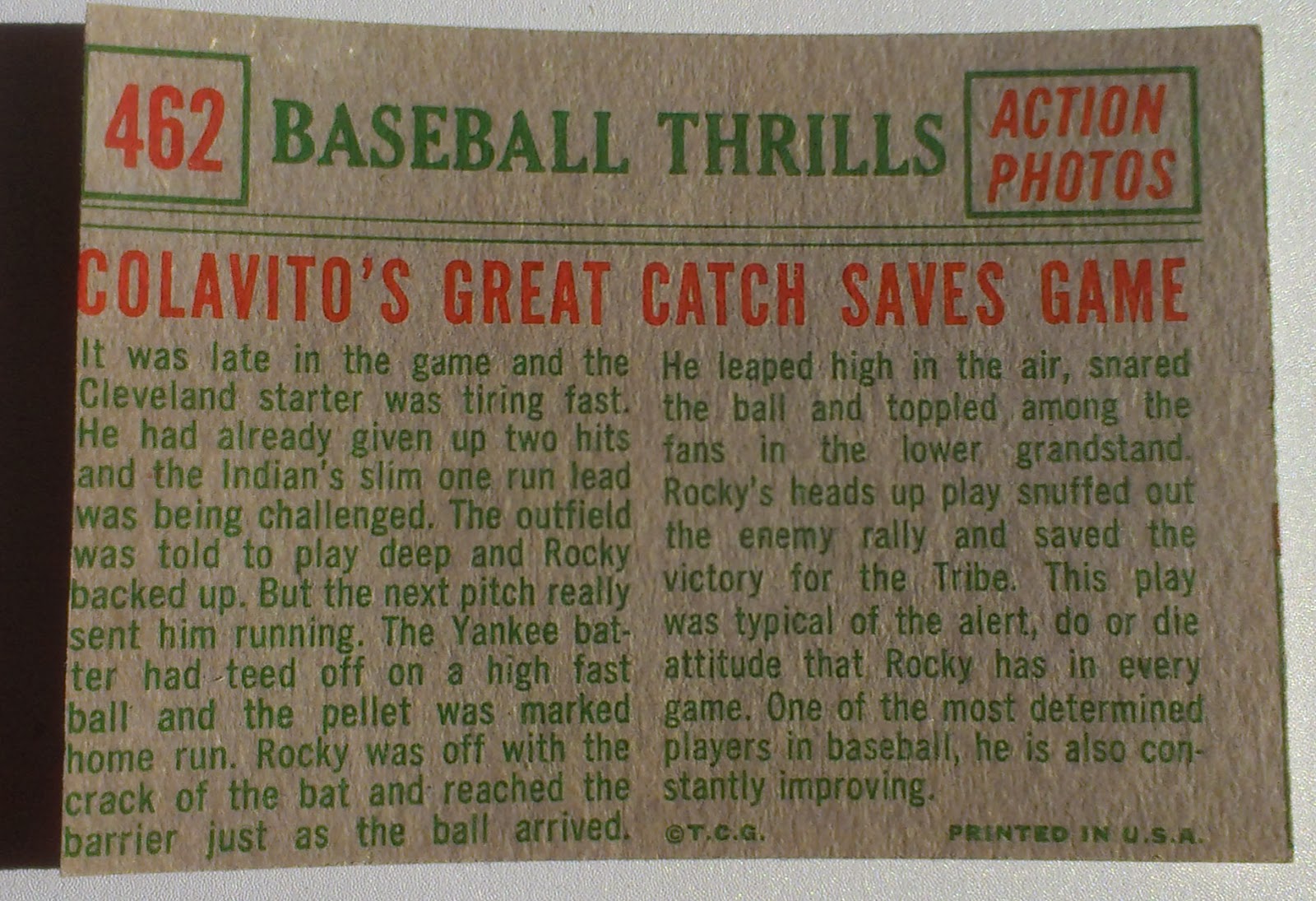 All we find out is that the game was versus the Yankees and the go ahead run was on base. No mention of the pitcher or batter involved nor is the date or park cited.

I did some minor research on the photo in an effort to figure out what game this is from on my own. I came up empty. fortunately CommishBob had gone through some diligent effort which is summarized in this post. The game is from May 10 1956, The play occurred in the 6th inning, on a ball hit by Gil McDougald. Turns out that the game account on the card is almost a total fabrication. At the time of the AB, the game wasn't really close (4-0 Indians),  the bases were clear, and Lemon certainly wasn't tiring - He threw complete game.

1956 Rookie of the Year
The card captures Colavito during his rookie campaign. He finished 2nd in the 1956 RoY voting behind future Hall of Famer Luis Aparicio. Not sure what the voters were thinking here - Colavito batted 10 points higher than Aparicio and also won the Home Run Battle 21-3. Aparicio had a similar edge in stolen bases 21-0.

Colavito spent the bulk of his 14 year career with the Indians. He made 9 all-star teams across 6 seasons, but never made it to the World Series. Rocky placed in the top 10 of the MVP vote four times, the best of which was 3rd in 1958 When he led the league in slugging. The following season he led the league in homers (42) and Total Bases (301). In 1965 Colavito paced the AL in RBIs (108) and Walks (93)

Retired Rocky
Today Rocky is 81 and according to some TTM sites he lives outside of Reading PA in a town about an hour from Phungo HQs.