I know we are all caught up in 2015 Topps, but this is the modern world folks, and the Blog cycle must move on. 2015 Heritage will be out in about 3 weeks and I wanted to take a look at a few cards from the set that inspired the set 1966 Topps. One of the things I enjoy most about the annual release of Heritage is the opportunity to reconsider the original set. Last year we got to look back at one of Topps most memorable offerings. This is not the case for 1966T.

The design is functional it covers all the bases Photo, Player name, team and position are all present. Each team is given a color scheme, but they are not necessarily related to the team colors. As seen above the Phillies have Red lettering on a grey background.

There is a minor design element that is unprecedented by Topps. The diagonal strip with the team name goes over the photo in a fashion that the picture extends beyond the banner. It gives the photo a frame within a frame feel. I am not sure it helps the picture pop that much but it does center your attention a tad.

This is definitely a set that I often dismiss, The minimal design doesn't really draw the eye of the collector, but as I browsed through a binder, I did find a decent variety in the Photos, Lots of head shots, but there are also a niec mix of casual posed and faux action shots. 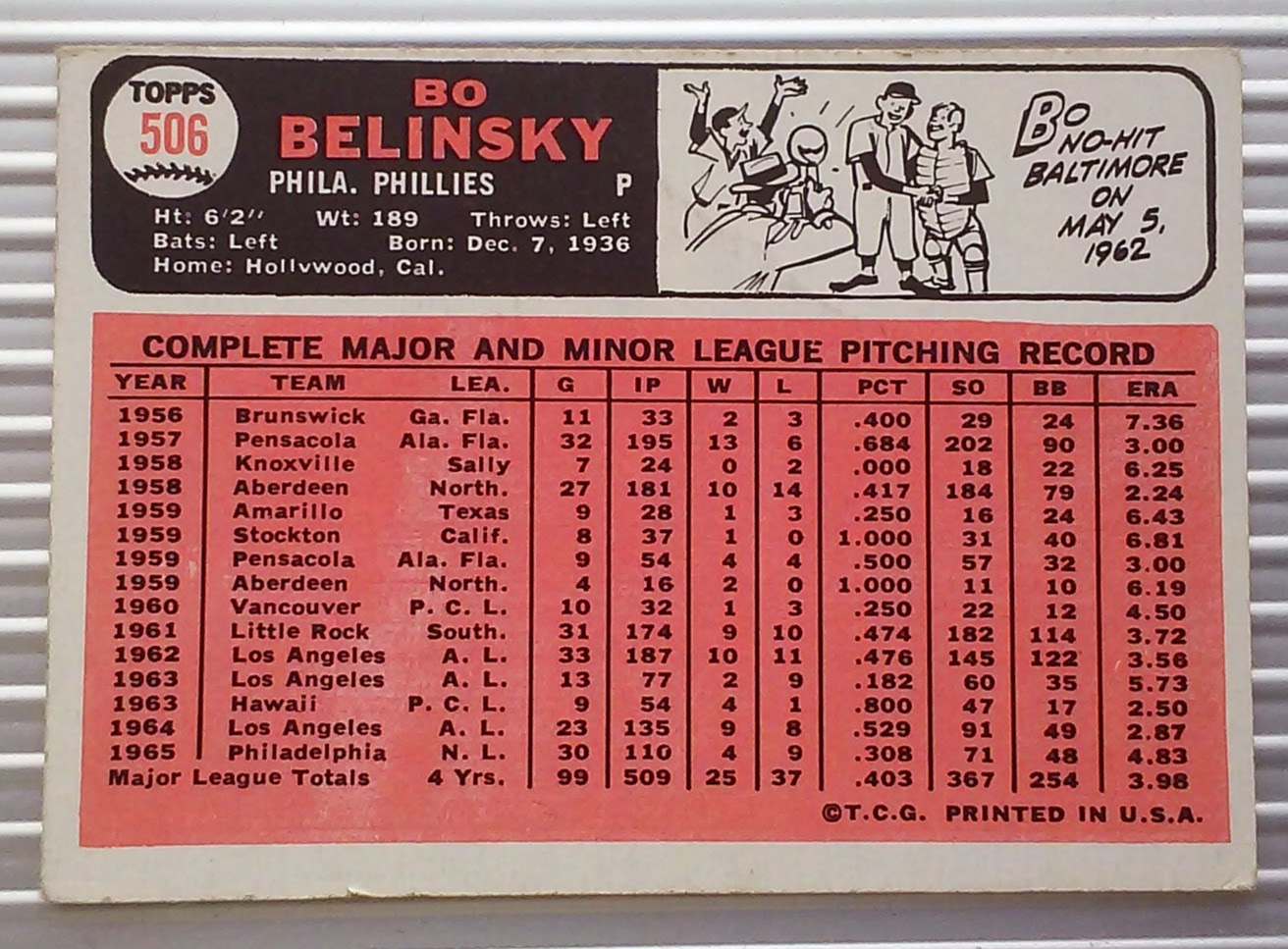 Backs are decent, pretty bright, easy to read card number, numbers and an nice informative -toon.  The no-hitter referred to occurred while Belinsky was pitching for the Angels. It was the 4th start of his career.

Bo Belinsky
I didn't realize that Belinsky did time with the Phillies until I returned to collecting. I did know he had a bigger off the field reputation than on field. His popularity likely rose quickly after the aforementioned early career no-hitter.

2015 Heritage
Over the next month or so we will take a look at both 1966 Topps and 2015 Heritage. For an index of these postings click here

Belinksy write an autobiography that I found my local public library back in high school. I don't remember anything from it regarding his time with the Phillies, but I do recall that he got silicon injections in his pitching arm to make it look bigger. The man was a first-class loon. :-)

Interesting, he was pictured as a Phillie in Swell's 1989 Baseball Greats set.

I still have the book:
http://canthavetoomanycards.blogspot.com/2011/02/25-ebay-gift-card-got-me_28.html