Today we take a look at Jonathan Papelbon's 2015 WAR projection. 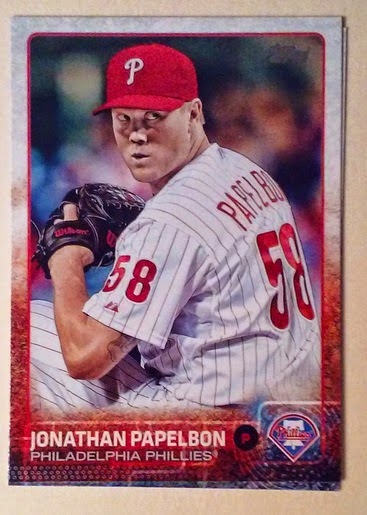 Papelbon is not one of my favorite Phils and I am not going to spend a lot of time over-analyzing his upcoming season.

He is coming off his best season as the Phillies closer. He is 34 and seems to pitch better when the stakes are higher. The stakes for the 2015 Phils don't look to be in Papelbon's preferred stratosphere. I am seeing some regression and will give him a 1.7 WAR for 2015.

There are a dozen Phillies on the 2015T S1 checker, of course as of press time two of those players are already gone (Byrd and Bastardo). Hamels or Lee may be gone prior to the beginning of the season. If they both remain healthy at least one will likely be dealt by the deadline.

The 12 players chosen don't leave much for S2. Among the players we can look forward to seeing are Ken Giles, Cody Asche, Darin Ruf, Aaron Harang, Chad Billingsley, Grady Sizemore, Freddy Galvis and whatever other Shortstop the Phillies can pick up in  the next month plus the team card.