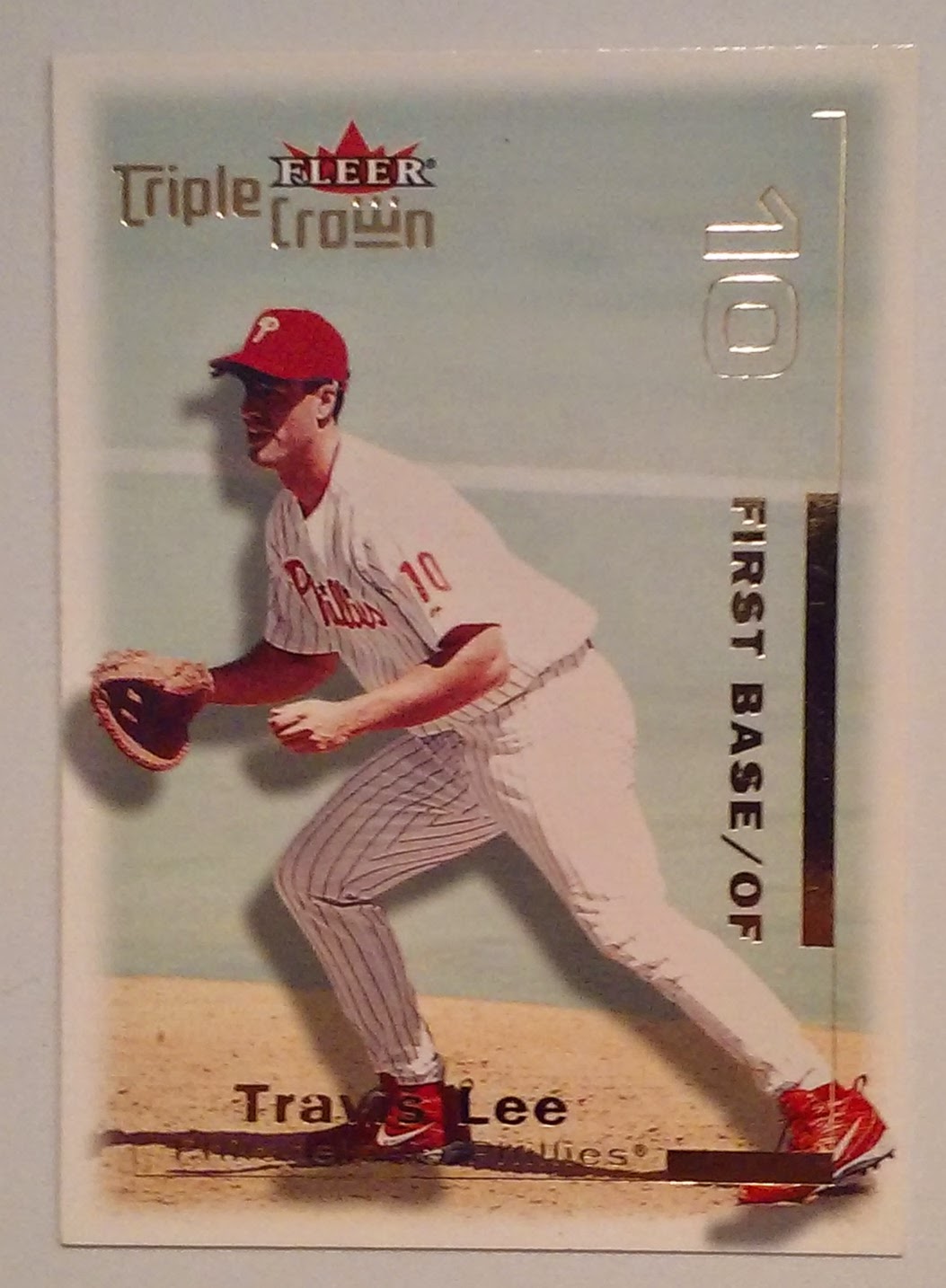 During the off-season there are a number of tidbits about former Phillies that I like to pass along with cardboard recognition, like yesterday's posing regarding Matt Stairs election to the Canadian Baseball Hall of Fame. Interesting and well deserved.

And then every once in a while something hits the radar that CANNOT be ignored.

Apparently SABR Hall of Famer Bill James has developed a new methodology for measuring fielding ability of players. The research has concluded that Travis Lee is the best fielding First Baseman of ALL-TIME.

Travis Lee's time in Philadelphia was so underwhelming that it is hard to imagine him being the best at anything. In fact Phungo has denied the Travis Lee's era to the point that he has been left off the blog until now.

Lee's biggest issue was not being as good as the man he was swapped for.  Curt Schilling was off winning the World Series with the D-Backs and later the Red Sox. In fact Lee struggled to be mediocre. His OPS+ in 366 games as a Phil was below average at 96. His top Batting average in 3 seasons with the club was .265, His best home Run total was 20.

In the field Lee did appear to fair much better. He was good at digging balls out in the dirt and was able to cover a lot of ground at the position. Lee did lead the league in Fielding Percentage twice, but that is a dubious stat at any position and even more so at First where Putouts throw the stat all out o whack. He never won a gold glove.

I am curious how Bill James came up with his numbers. Unfortunately his site is available via subscription only. Until this news advanced metrics have not been good to Lee - His career dWAR is actually a negative. He does pop on the defensive leader boards for a few of the newer numbers - Most notably leading the league in Total Zone Runs in 2003 (as a Devil Ray), His Career TZR ranks 37th all time. He was also ranked in the top 10 in range factor four times, but never led the league,

2001 Fleer Triple Crown
Lee is listed as First Base/OF on the card. He played 10 games in left for the Phillies in 2000. Those were the last games he played in the outfield. For the remaining 6 seasons of Lee career he played all but two games at first base, and both of those games were as a DH.

The 300 card 2001 Fleer Triple Crown set is probably better knows for it's extension - the Platinum RC Series. PRC is a 10 card set that was included in a totally different set, 2001 Fleer Platinum. The subset is serialed (/#2999) and included two significant rookies Ichiro (#306) and Albert Pujols(#309).

Recent auctions for the Pujols RC have gone as high as $75 for a graded version of the card, for more budget conscience collectors there were auctions that ended int the $25 range for ungraded cards. The Ichiro Card only had two auctions $10 ungraded and $31(Beckett 9 Mint) 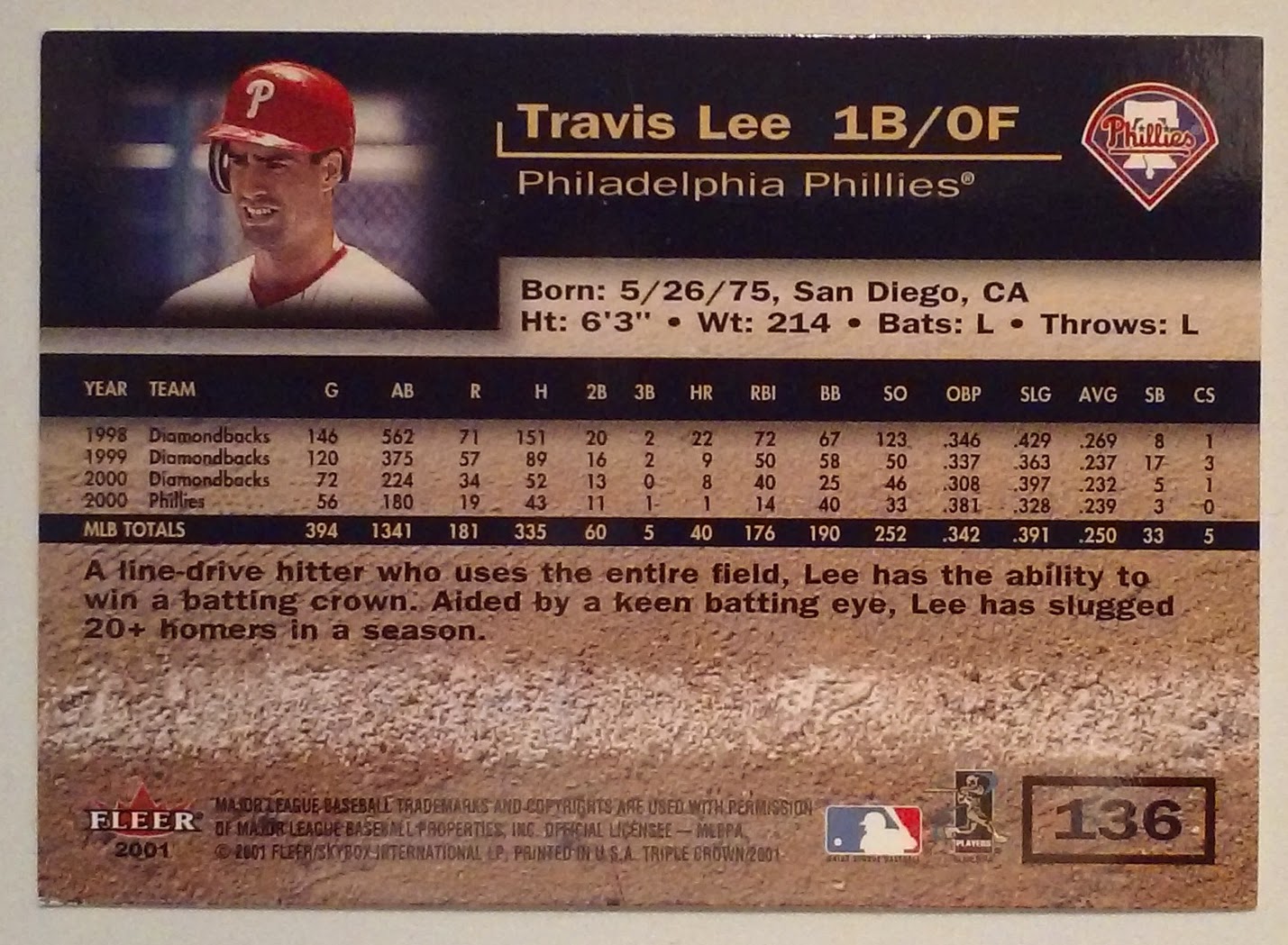