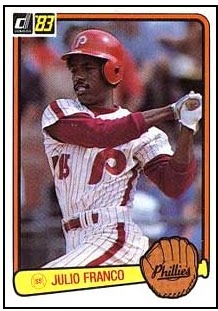 Yes kids that is an image of a card from 32 years ago, and that guy is still playing baseball.

Julio Franco only played one season with the Philies before being involved in the Von Hayes trade. He went on to play 22 more MLB seasons.

I took a quick look around and could not fine a Phillies Franco card in my collection so I swiped this fine one from Baseball Almanac. Franco played so long I just assumed he had more than one campaign with the Phils, but at least that explains why I had such trouble find one of his cards.