1990 Year of the No-Hitter: Greg Harris?? Lo-Hitter - A Pat Venditte from two decades ago

Greg Harris did not join the Red Sox rotation until the teams 17th game on April 28th. He was pretty much the definition of a SwingMan, but given the opportunity to start for a very good 1990 Red Sox team, Harris made the most of his opportunities.

On June 7th Harris had his best start of the year, He and Closer Jeff Reardon combined to throw a 1-hitter as the Red Sox shutout the Yankees  3-0 . 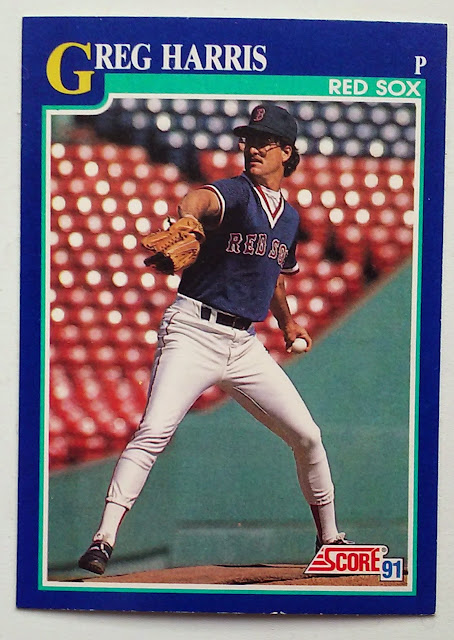 Notice this is a Lo-Hitter as opposed to a Near-Hitter. The difference being that in this Game Greg Harris gave up a fifth inning single, while in a Near-Hitter (see Brian Holman or John Smoltz) The No-Hitter stays in tact deep into the game. I would say at least into the 7th is a good yardstick of went to start Near-Hitter talk.

Box Notes
The batter that foiled Greg Harris' meeting with infamy was Yankee outfielder Jesse Barfield - and once again we will bring up how small a world baseball is and let you know that Barfield will play a role in a future Year of the No-Hitter posting.

Barfield was the only Yankee to reach base as Harris/Reardon pitched to one over the minimum. The final inning was uneventful although there was a Hall of Famer that batted that inning, although it was a football Hall of Famer - Deion Sanders. 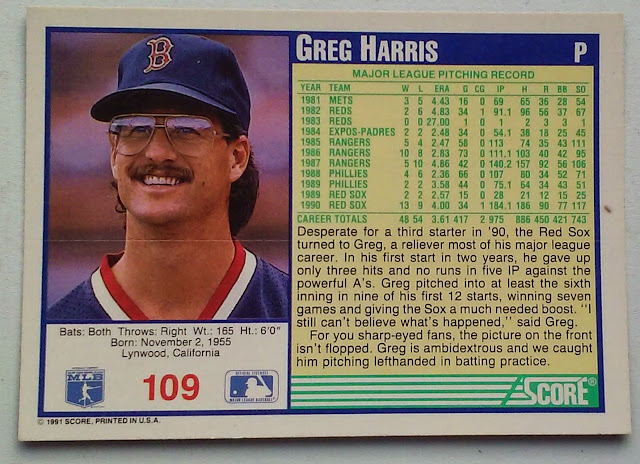 This is a GREAT Card. Notice in the box with Greg Haris' Demographic info we find that he is right handed. Now look at the action shot on the A-side. Harris is throwing Lefty.

What is going on here?

Check the end paragraph on the back of the card. The Ambidextrous Harris is tossing BP in the photo and he is throwing Lefty, I would assume he is a bit less dominant from that side.

We have some fortuitous timing here as this earlier this weekend The A's called up switch-pitcher Pat Venditte. He has a special Ambidextrous glove that allows him to pitch from different sides in the same inning, can't tell from the above photo, but it appears that Harris is using a LH glove on his right hand.

Sources and Links
1990: Year of  the No-Hitter
Baseball-ref

There's video of Harris pitching left handed to Hal Morris. His first pitch is juuuust a bit outside.