A star is Born.

On June 2nd Randy Johnson authored the second no-hitter of the 1990 Season. 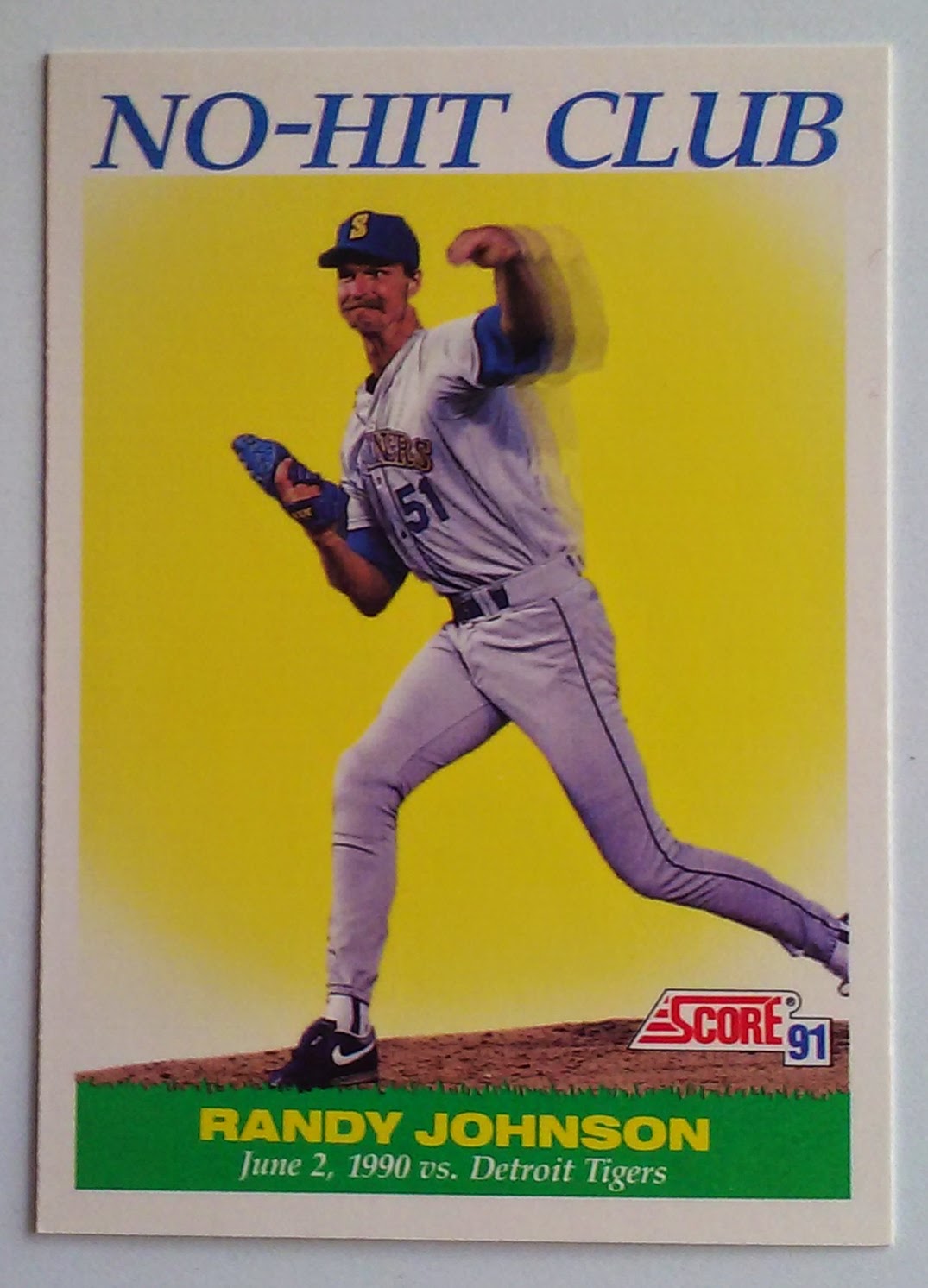 Back in April Johnson's teammate Brian Holman had come within an out of a perfect game, but he lost it on a Ken Phelps Home Run.

Randy Johnson's start would end up differently. He retired the last five batters he faced, his 9th inning went Strikeout, Pop Out, Strike Out. The final batter was journeyman catcher Mike Heath who went down swinging on an 0-2 pitch.

While it was a No-Hittter, Johnson was far from perfect. He allowed six walks, and Mariners Shortstop Mike Brumley committed an error. 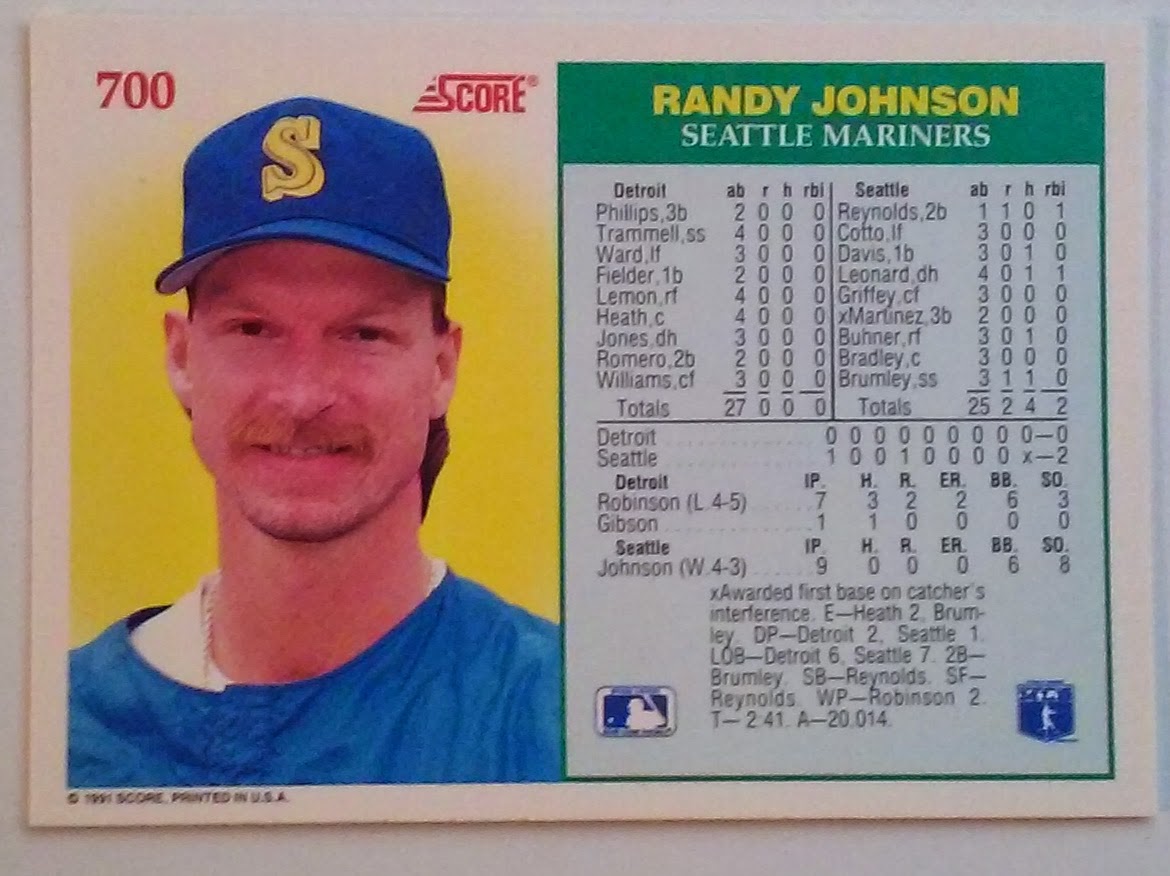 Couple of good hitters that Johnson had to sit down, including Cecil Fielder and perennial Hall of Fame snub Alan Trammell. The "Williams" in the 9 spot of the Tigers Order is Ken Williams, the current GM of the Chicago White Sox.

The defense behind Randy Johnson included Ken Griffey Jr, Pre-DH Edgar Martinez, and MLB Network analyst Harold Reynolds. The right fielder for the Mariners was Jay Buhner who was traded for the aforementioned Ken Phelps, the man who spoiled Brian Holman's no-hit bid.

The No-Hitter was the first of two for Randy Johnson, 14 years later he threw a Perfect Game versus the Atlanta Braves as a member of the Arizona Diamondbacks. 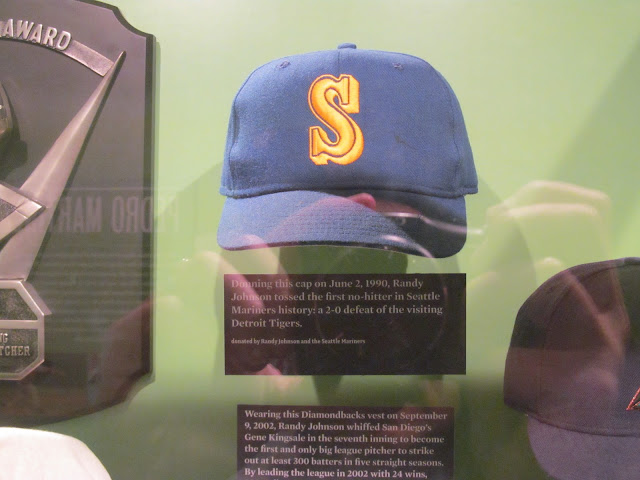 Team Phungo made a brief stop at the Hall of Fame recently and we spotted this item in the Randy Johnson HoF display.  Pretty cool item here with the Classic Seattle Logo, which probably most synonymous with the career of Young Ken Griffey Jr.

The HoF visit was quick but fun. While I dedicated most of the day to the Cooperstown Classic, I did manage a quick HoF tour and we will show of some items/displays over the next couple of weeks.


1990 Seattle Mariners
There Mariners were 51 games into the 1990 season and had been involved in two no-hitters Plus Brian Holman's near perfect game. The teams promotions department would attempt to capitalize on the events by sponsoring a Guaranteed No-Hitter Night. We will cover that game in a a future post, I will just let you know that one of the starting pitchers that evening was Nolan Ryan.

2015 Randy Johnson
Part of the reason I wanted to do a series on Year of the No-Hitter is with so many pitchers involved there are just tons of great stories. We have already had the Mariners involved in 2 no-hitters (one on each side) and a near perfect game. We have had Mike Witt who completed a no-hitter after years earlier pitching his own perfect game.

And now we see a future Hall of Famer just as he emerges into greatness.

I am a fan of Twitter and one of the more interesting follows has been Randy Johnson. He dedicates a lot of time to his photography, and due to his resources he has premium access for great places and events which makes for some great shots. Right now his account appears dormant but his website is still operational - @rj51photos