I have pondered this about Barry Bonds 73 Homers. I remember the weekend Bonds broke Mark McGwire's record and went on to hit a couple of more homers. I saw the Record Breaker in a crowded bar with an excited crowd. There were cheers and toasts. It was like we had broken the record.

But time changes things and we never really got to enjoy Bonds breaking Hank Aaron's record.

The movement in time has now also changed how we perceive Bonds' 73 and McGwire's 70. But does that really take that moment away from us? 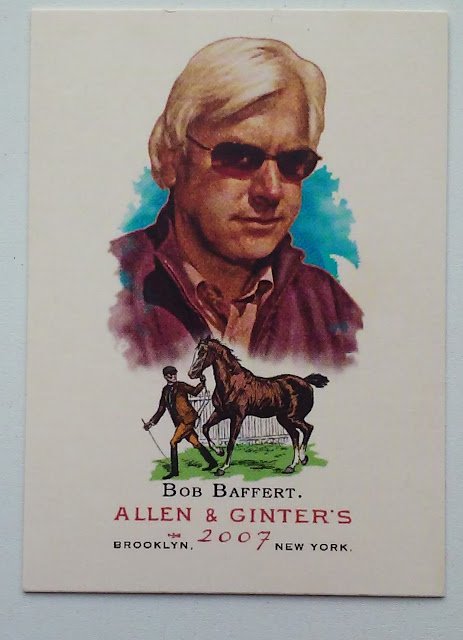 I sincerely hope that scandal doesn't rob us of the first triple crown winner in a generation.

I had a great time watching the race yesterday. Once again I found myself in a busy restaurant on beautiful day with a alcohol fueled crowd, we wanted to see something great happened and it did.

Things are rarely perfect in life but when it happens it is pretty awesome.

Cograts to American Pharoah and his team. One of the folks involved in the horses success is Trainer Bob Baffert.

Topps made Baffert part of their 2nd edition of A&G in 2007. Baffert has a distinct look that is captured pretty well on the card, nice touch with the inset picture of the horse and trainer. 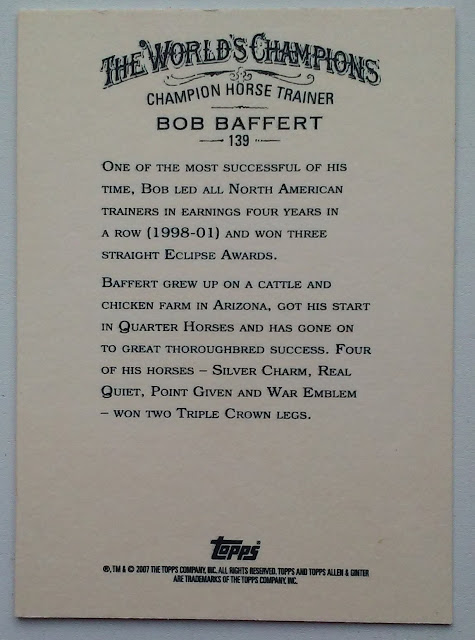 Nice Synopsis of Baffert's career including his 4 previous near misses.