June 29th 1990 was one of the two greatest days in No-Hitter History. It started in Toronto with the Oakland A's Dave Stewart..... 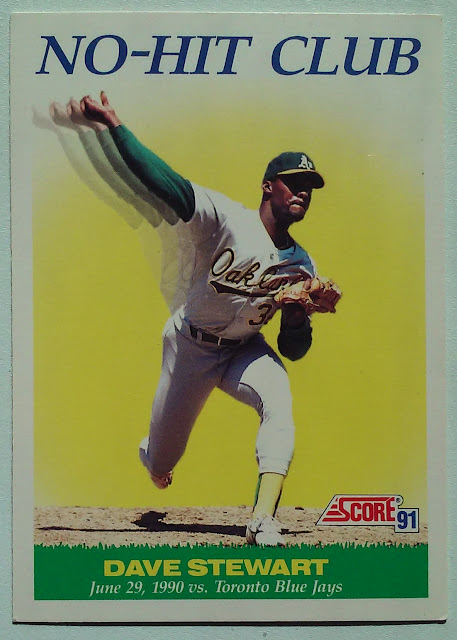 1990 was the fourth consecutive year that Stewart would finish in the Cy Young top four. He was coming off a World Series MVP award in 1989 and was near the top of his game.

That was not good for the Toronto Blue Jays. 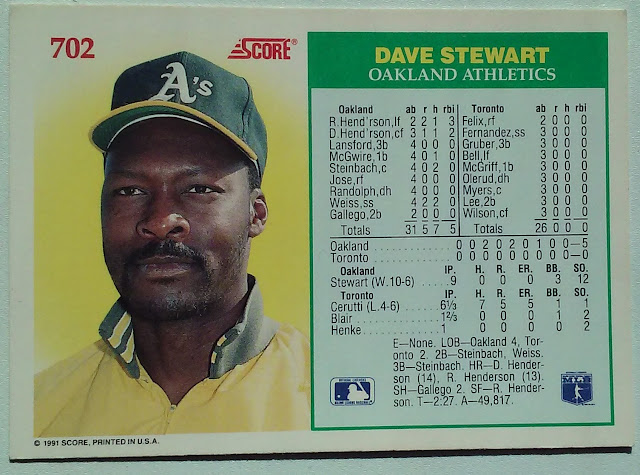 Stewart was dominant, He struck out 12 and walked 3 pitching to two over the minimum - the extra runner (Junior Felix) was eliminated via caught stealing.

Looking inside the box we find the 1990 Blue Jays to be a pretty good hitting squad, Fred McGriff would hit .300 that season and the young John Olerud would eventually win a batting title.  Stewart's final three outs were Strike Outs of Manny Lee and Mookie Wilson and a Tony Fernandez Fly Out.

Dave Stewart's battery-mate for the no-hitter was Terry Steinbach who doubled and tripled in the game. In 1999 as a member of the Twins Steinbach called a second no-hitter authored by another Phillies connected pitcher - Eric Milton.

Among the folks playing defense for Stewart's no-hitter was future Hall of Famer Rickey Henderson. Rickey pitched in with a Homer, Sac Fly, and a Put Out in left.

in 2003 Dave Stewart was pitching coach for Team USA for a look at his 2004 UD card check here
Sources and Links
1990: Year of the No-Hitter
Baseball-ref