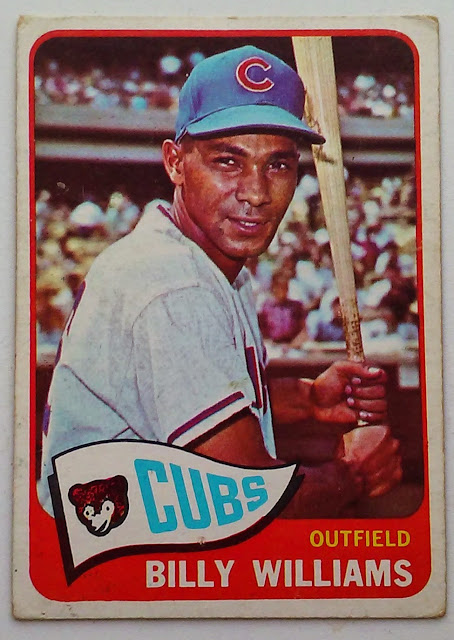 If it wouldn't be for Johnny Bench, Billy Williams would also have a pair of MVP awards on his mantle as well.

The only omission is his modest postseason contributions. Like all the big time Cubs of the era (or almost any era) Williams got shut out of the World Series until he moved onto another team. Williams finally got to experience the playoffs in 1975 at the age of 37 as a member of the Oakland A's.  Unfortunately his only playoff opportunity was brief as the A's were swept by the Boston Red Sox. 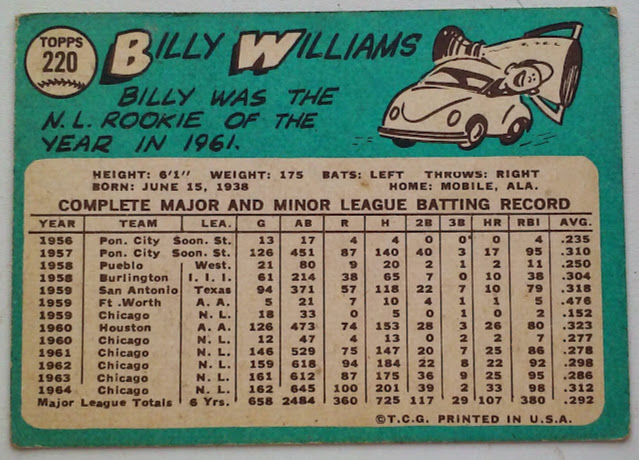 Nice snap shot of Billy Williams number mid career. At 27 the man was established but still early in his career, He would hit 319 Homers after this card was produced. The cartoon is a nice nod to Williams Rookie of the Year award in 1961. He appears to be driving a VW Beetle, likely as nice a car as a rookie could afford in 1961 when Billy Williams pulled in an estimated $9500.


Post career Billy Williams returned to the Cubs as a coach but never got the chance to manage a club. In August 13th 1987 The Cubs retired Williams #26 just a few after his induction to the Hall of Fame. The Cubs drew 35,033 for the ceremony and the Fans got to see a W that day.

Phun Phact
The trade that sent from Billy Williams to Oakland was for a package of players that included Manny Trillo - The second baseman for the 1980 World Champion Phillies.

Sources and Links
Baseball-ref
SABR bio by Mark Armour
This Day in Chicago Cubs History
Posted by deal at 7:11 PM