This week Sunday Night Baseball remains in LA for a second consecutive weekend but moves across town to broadcast the Cardinals and Dodgers. Our companion column features Baseball Ambassador Tommy Lasorda 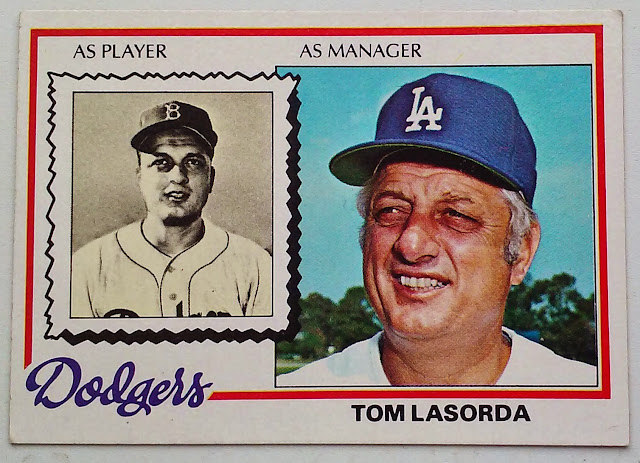 To me he has always been Tommy Lasorda, but the only Topps card that lists him as "Tommy" is his 1954 RC. The eleven Lasorda Manager cards in the Baseball Simulator Topps DB all list the Hall of Fame Manager as "Tom"

Lasorda was elected into the Hall of Fame as a manager by the Veteran's Committee in 1997. His HoF Credentials include 1599 career victories all at the helm of the Dodgers. The pinnacle of those Wins were World Series Championships in 1981 and 1988. During his 18 full seasons the Dodgers won seven division titles and four NL Pennants. In addition to those season Lasorda also at the Dodgers leading the NL West in 1994 prior to the seasons work stoppage.

His Division wins in 1983 and 1988 won him the Manager of the Year award, an honor he received votes for six times during his career.

1978 Topps
I don't believe Topps will ever release a better looking manager card than 1978T. This is a subset I would like to cover at some point. The recent/archive photo combo is a terrific take on the manager card. 1978 was probably the last moment you could pair a Black & White photo with a color one on a trading card. 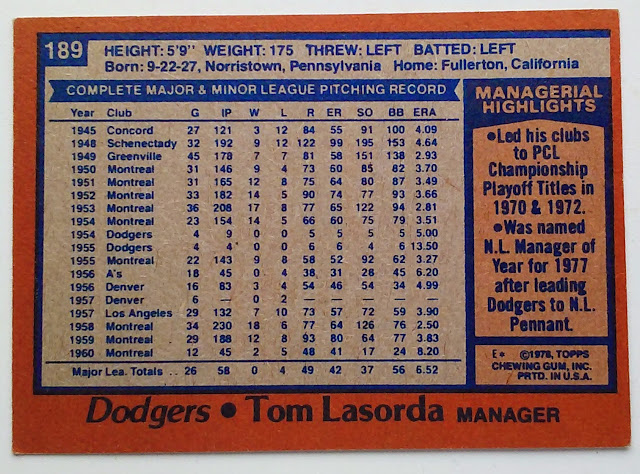 As you can see Tommy was born in nearby Norristown. Prior to becoming a Dodger Lasorda was initially signed by the Phillies and still has ties in the area.  His family used to own a Bar/Restaurant in Exton PA - among my regrets is never making it out to the eatery which is now Weso's

Tommy Lasorda at age 87 is less visible than he once was but at one time he fulfilled the ambassador role not just for the Dodgers but for all of Baseball.

We have chronicled several Baseball Ambassadors over the years and I am going to use this Tommy Lasorda posting as an index for those postings: