Of course Cole Hamels was the backbone of the Phillies pitching staff this year. Between the regular and postseasons he logged 262 innings. I am not positive but I believe that is more than anybody in baseball this past season. And of course he had four playoff victories which potentially could have been a postseason record five had game 5 of the World Series been played under better conditions. Still his World Series performance was good enough to earn Hamels the series MVP award. 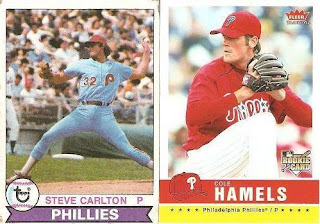 Cole Hamels will turn 25 this month and as a Phillies fan I hope that he maintains his health and has a long and productive career here. As a baseball fan I know, realistically, the possibility is a coin flip at best. Hamels has been a bit of an injury risk throughout his early career. The Phillies have been cautious about not overworking him or pitching him when he is not entirely healthy. Hopefully this approach will payoff for both Cole and the Phillies.

Secondly the Phils and Cole Hamels have to both decide that it is in their best interests to remain together. Hamels is not due to be a free agent for a number of years, and if he has another year or two like 2008 he can expect to make a lot of money. Whether or not the Phillies elect to spend that money is yet to be seen.

As you can see I have paired Cole Hamels with Steve Carlton in the above scan. I am going to try and pair each Phillie from this years World Championship team with a Phillies Alumni. The Hamels-Carlton pairing is premature at this point in Cole's career, but one cannot dispute that each of the two was an Ace during his clubs playoff run.


I will close by noting Cole Hamels comments during his brief moment with the microphone during the Phillies Championship Parade ceremony. He said he looks forward to the Phils winning the World Series “Again and Again and Again!”