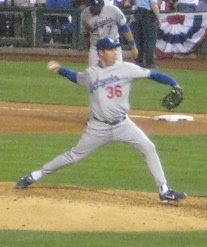 At the time we didn't really know. An astute observer may have suspected.

Yes, when Greg Maddux came into game one of the NLCS on October 9th, he was making one of his final appearances. He would be called upon only one more time, in Game 5 of the series, for a long relief stint.

The Picture above is of Maddux warming up to pitch in game 1. It was the last appearance Maddux would ever make on the road. Penultimate is defined as "next to last", thus October 9th 2008 was Greg Maddux's penultimate performance.