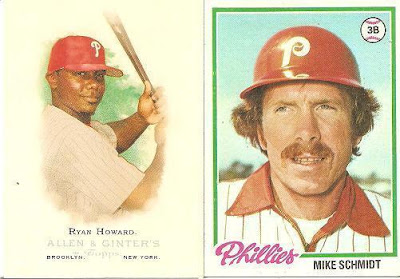 This is the second installment of the 2008 World Champ tributes. In this series I am chronicling the key players from the 2008 Phils and pairing them with a Phil from the past.

When I wrote up Cole Hamels a few weeks back, I made the obvious comparison between Hamels and Steve Carlton. It's not really fair, Carlton is a Hall of Fame pitcher with 300+ career wins. Hamels is 24 with less than 3 years of Major League experience.

Today I make another lofty comparison. Ryan Howard and Mike Schmidt. No, they don't play the same position and Howard will never be the defensive standout that Schmidt was. But each of them was the big home run hitter for their respective World Championship teams. On the back of the above Schmidt card one can find that in 1978 he was 29 years old, had 169 homers and a career .256 average. Ryan Howard has just turned 29, he has 177 Home Runs and carries a .279 carreer BA. RBIs Schmidt 474, Howard 499. Those numbers are pretty darn close.

At 29, Mike Schmidt still had the bulk of a Hall of Fame career in front of him, I hope Ryan Howard does also.
Posted by deal at 1:03 PM