I recently pulled this from a pack of 2008 Topps Stadium Club. 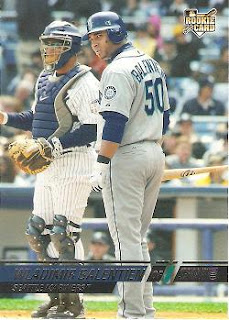 2008 Topps Stadium Club #134 Wladimir Balentien
My Question for the Yankees fans out there is, can anyone identify the catcher as Jose "Name that Molina" Molina?

I am pretty sure I was at this game - The Mariners visited the Yankees for two day games this year May 3 and May 4. One of those games was caught by Molina the other by Chad Moeller.
Also I have a similar question regarding a Miguel Cairo card if anyone can help me there.
This card was pulled from my first pack of 2008 Topps Stadium Club. The entirety of the pack is listed here.
#49 John Smoltz
#140 Max Scherzer
#137 Brandon Jones
Balentien
#60 Scott Kazmir - First Day Issue

1 Hall of Fame Starter, another starting pitcher I like, 2 pretty decent prospects, and possibly a card where the Photo was taken at a game I attended. Thats a pretty good pack. If there was a Phil present I would give it a solid A. I will have to go with an A-

PTBNL once again won Spot the Sig! I will post standings later in the week. PTBNL didn't have anyone on base so the scores are basically unchanged except he has a runner on 2nd now.
There is still time to get involved in the STS! bonus quesion by posting here. I am still hoping for at least one Phungo reader to pick Penn State.
I hope to get to the Len Dykstra profile on Wednesday.
Posted by deal at 9:42 PM

He's a pretty big dude and I am 99 percent sure that's Molina.

Thanks. I agree. Molina is definitely a big dude.

I will happily stick this one in my games Phungo has been too binder.