Phungo is returning to the Philly Sports Hall of Fame posts that we started last month. Today we take a look at a couple of athletes from outside the major sports, Leroy Burell and Dorothy Porter. 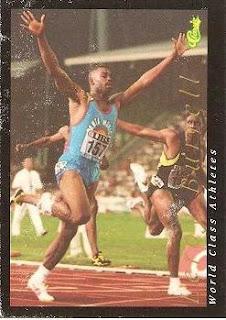 Leroy Burrell was a Philadelphia area Olympic Track Athlete. He won a gold medal in the4x100 relay in the 1992 Barcelona Olympics. Burrell was the world record holder for 100m from 1994-96. He also won a couple of other Gold Medals in World Championship competition, no easy task when competing as a contemporary of Carl Lewis.

Burrell is currently the Head Coach of Track and Field at his Alma Mater, University of Houston. He has been at Houston since 1988 and his teams (Men's and Women's, Indoor and Outdoor) have combined to earn an incredible 21 titles.

The card above is from LP Classic. The set is a sixty card set of athletes from a variety of sports that appears to be centered around the 1992 Olympics. There are several sports represented including Swimming, Tennis, Football, Basketball, and Baseball.

Dorothy Porter was a womans golfer during the 1950s and 1960s. She was a member of the US Curtis Cup champion team of 1950. The Curtis Cup is apparently the Ryder Cup of Women's amateur golf. She also captained the 1966 championship team. Porter went on to win numerous other amateur and four Senior championships through 1984. Porter currently lives near Philadelphia in South Jersey.
Posted by deal at 10:34 PM