Yesterday, I posted regarding a Sox or No Sox style competition between three retail packs of UD Masterpieces. Each of the three packs is from a different sport, Football, Hockey, and Baseball.

Both PTBNL and Sooz picked Baseball, I hope they are right. That's where I want to get the best cards from. Let's see what happens.

The scoring for a pack is as follows: Any Hall of Famer +2, Any Phillies or Orioles +1 Each. Vikings or Eagles +1, Flyers +2, Mets, Packers, Devils and New York Rangers (Hockey) all minus 1. Oh and If there is a hit, auto, serial #d, Game used whatever +2 to +10 points depending on what it is. Pack with the most points wins. 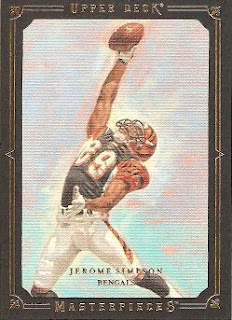 Four blah rookies, Royal is the only one to make an impact. Simpson is the "hit" and he has gotten 1 stinkin catch all year. No Vikings, Eagles, or Packers no points. I would have awarded 1/2 a point for Simpson had he done anything this year, but 1 lousy catch. 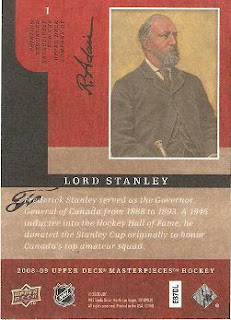 I posted the reverse side of the Lord Stanley card, because I like what Upper Deck has done with both the Football and Hockey cards. They have an inset of the front photo with the artists name listed next to the picture. This is a nice touch, which I hope they carry over to baseball in 09. 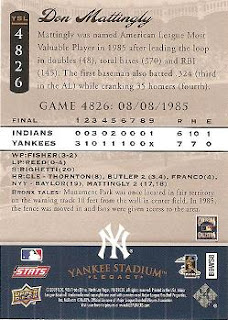 I posted the Mattingly card because I found it the most interesting. This is one of the few YSL cards that I have come across where the player on the photo had a significant contribution to the game. The Yankees won and Mattingly had two home runs. Those dingers were just two of the 35 that Mattingly had during his MVP season in 1985.

Three stinkin packs No Phils, No Vikings, No Eagles and No Flyers.

The pack bust was good for a bonus base in Spot The Sig! for anyone who could guess the winning pack. Unfortunately Hockey was unloved so noone will get the bonus.

But have no fear....Your Sunday is not ruined. You still have this weeks auto to look forward to. The STS! will be up at 9:30 PM Eastern.
Posted by deal at 11:00 AM

I have never opened a hockey pack before. I didn't know what was in it.

I picked baseball because I feel I get a Phillie in just about every pack I open. Phillies and Chipper Jones, that's what they all look like.

A Phillie in every pack? That would be awesome!