Recently the fine folks at Dinged Corners posed a series of Baseball Card Collecting questions. They are always good at coming up with interesting and thoughtful questions for their readers. Today I post my answers to their Qs.

2-My baseball heroes include one you probably wouldn't know from my blog or comments, and that person is Johnny Damon. I have always admired his style of play and recently found out that he is of Thai descent. I, like Damon, also have a Thai mother. Thailand is not a big country and Damon is likely the only player with any Thai background whatsoever to play in the Major Leagues.

4-If I could spend a day with one person from baseball history, it would be Bill Lee. 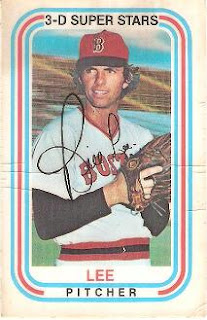 I always thought of Bill Lee as a thinking man's ballplayer - a little too crazy for 70s baseball. But I am sure he'd be a great guy to party with.

Kellogg's put out sets of "3D" cards during the 1970s that could be acquired as prizes in their cereals. There was a related promotion where one could get the entire set by sending in a couple of box topps plus a few dollars. The Sets numbered in the 50s I think, the 1976 set had 57 cards.

1-What is your favorite kind of dog?
animals cause me trouble, but I would probably choose Collie, Pug, or Beagles - since those are the only ones I am familiar with.

2-Who is your favorite baseball player?
Utley

3-What is your favorite team?
Phightin Phils!

4-What is your favorite baseball movie?
Easily "Bull Durham"

5-What is your favorite baseball book?
"Ball Four" I also liked "A Thinking Fan's Guide to Baseball" and "Men at Work". I hope to pick up "Living on the Black" at some point.

6-What is your favorite card?

To many to mention - just about any card from 71 topps or any other early 70s set.
I am looking forward to any cards that commemorate the 2008 World Series - and will be extremely dissappointed if that aren't any that show game 5 of the 08 World Series.

This was enjoyable. Dinged Corners - Keep the questions coming!