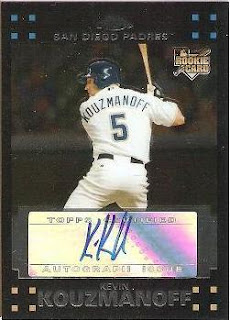 Mark from "Stats on the Back" correctly identified Kevin Kouzmanoff as this weeks Spot the Sig! subject, and Mark also correctly guessed that my girlfriend, Jo, works in Russian.

Kevin Kouzmanoff, which as Sooz from "A Cardboard Problem" has pointed out, is not really Russian. He is Macedonian. Kouzmanoff was called "the Crushin Russian” early in is his career, perhaps to correct this misrepresentation he has more recently been dubbed "the Mashin Macedonian".

We do make note of all things Russian in our home so Kouzmanoff quickly became a house favorite, despite not really being Russian - there really aren't any Russian ballplayers, Eastern Europe is more of a hockey hot bed than baseball.

It really isn’t clear what Kouzmanoff’s career ceiling is going to be - Hitting a Grand Slam versus your first career pitch is certainly a mixed blessing. It has made Kouzmanoff an instant baseball celebrity, but has set high expectations. While the man has considerable power, His 23 homers in 2008 is pretty darn good considering he played half his games in PETCO park. On the other hand he is a bit high in the strikeout area and finished the season with an OBP below .300. Kouzmanoff is 26, and I tend to believe that he can cut down on the strikeouts and gain even more power over the next couple of years. For more Kevin Kouzmanoff information keep your eyes on A Cardboard Problem - there is a rumor of a feature on today's hero at some point in the near future.

Stats on the Back has stretched a double into a triple on the bonus and driven in a run to tie PTBNL and Cardboard Junkie for the STS! lead.

For further information regarding the Phungo Spot the Sig! contest click here and join the party - you just may find yourself with a stack of cards come spring training!
Posted by deal at 9:15 PM

That's the rumor at least.