Tino Martinez a White Whale and the Agony of Defeat 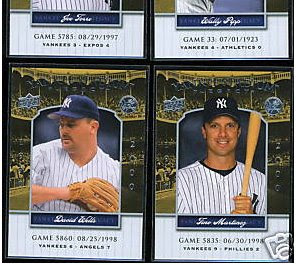 Some people’s White Whale may be something incredibly hard to get and possibly prohibitively expensive – the 52 Mantle for example. But for a lot of people something a lot more conventional. It may be a hard to find chrome Jose Cruz Jr or an early 80s Sparky Lyle Card. My White Whales fall in this latter category, they me be plentiful and a lot cheaper, however that may not make them any less hard to find.

Last week I noted in the initial Blog Bat Around that I seek cards that represent games I have been to. One of the cards I mentioned was YSL #5835 Tino from this year’s UD Yankee Stadium Legacy collection.

I have only been to two games at Yankee Stadium and one this past year and one on June 30th 1998 – the day represented by the card. Since there are no Yankee Stadium Legacy cards from 2008 games yet, presently the YSL #5835 is the only one I want.

So many Yankee Stadium Legacy cards exists that people are giving them away. The problem is that YSL is such a behemoth to deal with that finding a specific single card is a bit of a needle and hay stack issue.

Imagine my surprise when I saw YSL #5835 in a recent ebay auction. I was shocked and happy to see it. First off I had never seen the card. Unlike the ‘52 Mantle - seen lots o those. I confirmed it was the one – I had only conjectured the card number from other YSLs I had seen and the Yankees 98 Schedule in Baseball-Reference. Right Date Check - Phils Got Clobbered 9-2 sounds about right Check – definitely the one I wanted. WhooHoo I had found my YSL Whilte Whale.

The was in a 4 card lot of YSLs with a starting bid of .99 cents and 2.75 shipping. I entered a minimum bid and thought to myself who the hell else is going to bid on these 4 YSL cards and forgot about it. A Yankee Stadium Legacy card certainly isn’t worth more than 4 bucks.

Well several hours later I got my 2nd shock of the day when I found somebody had bid 2.75 to win the four cards. Perhaps I should have factored in that #33 Wally Pipp was in the lot. Don’t know, but I had missed my White Whale and felt the Agony of Defeat.

Looking back I wouldn’t change a thing. It turns out the card isn’t worth $5 to me. At least right now it isn’t.

What do you think?

1) Stick to your guns Phungo. You’re absolutely right - There ain’t no way you want to pay over $5 for a single Yankee Stadium Legacy card.

2) Phungo you’re a – This is a White Whale for a Fiver! – This is a priceless artifact for your collection and you let it go for five bucks. What the Hell are you thinking?

You're absolutely right: there's no way a Yankee Tedium card is worth $5.

On the other hand, when you find another copy... maybe it would make sense to bid more aggressively - hunting for a needle in a haystack is no fun, either.

If I had it I'd mail it to you. But I don't. Yhe latest Beckett Baseball lists the commons (which includes nearly all of them) at $3.00 which makes no sense to me.