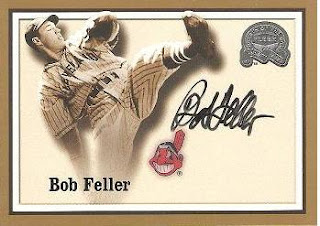 Bob Feller won 266 career games, every one of them with the Cleveland Indians. He was also a member of the most recent Cleveland Indians team to win the World Series in 1948. The 266 Career wins is an even greater accomplishment when you consider that Feller gave up 3 prime years of his career for Military service. Those three years from 1942-1944 were sandwiched between 25 and 26 Win season for Feller.

Feller is frequently outspoken and I admire his convictions. Last year he was in the booth for a very entertaining inning or two during the American League playoffs, as I remember he did not hold back on any criticisms of the current state of baseball or the disposition of the games players.

Bob Feller autographs, are in pretty high circulation on Ebay. You can also acquire one through the , located in Rapid Robert’s hometown of . The charge is $20 although right now they are running a discount that brings the price to $16.20. I couldn't figure out the shipping charge, but I would imagine that it would bring the item back into the $20.00 range. Twenty bucks for an autograph of a 90 year old Hall of Famer seems like a decent deal to me.