Today's reader salute goes out to fellow Phils Phan PTBNL who had a big 3 run inning in the Spot the Sig! contest Sunday. PTBNL was at a cosiderable advantage, he had just posted a Frank Robinson auto at Auto-matic for the People - so not only was he familiar with the auto it was likely fresh in his mind. I already had the STS! auto mapped out, and considered withdrawing the Robinson, but decided to leave it in the contest.


PTBNL has been an active participant in Spot the Sig!, often getting his guess in early on Sunday Nights. He was also gracious enough to come up w/ some suggestions for places to go when my girlfriend and I took a recent mini-vacation in Virginia. Thanks PTBNL and Phungo Salutes you!


My favorite PTBNL entry at Auto-Matic for the People was for a Pat Burrell Auto. The post is definitely worth a read, it is both heartfelt and interesting.


In honor of PTBNL's Burrell fandom I post one of my favorite Burrell cards:


As I noted in my blog bat around post several weeks ago, I like cards that commemorate games that I have attended. The date noted on this card is opening day of the 2004 season. Unfortunately the Phils lost the game, but I still enjoy the look of the 2004 fleer Authentix cards. There is a bit of shiny chominess (didn't come through in the scan) which helps the card look a little sharper.

Pat's days in Philadelphia are likely over, I hope that he goes somewhere he can continue a productive career. He's had his ups and downs in Philadelphia, but he is a World Champion an nobody can take that away from him.


Back to this weeks autos. The Frank Robinson card is part of a Hillshire Farms series produced in 1999. I first became aware of them via a Dayf post also on Auto-matic for the people. And he is correct, I believe you can likely pick up each of the Hillshire farms autos for under 10 bucks on ebay, possibly even 5 including shipping. 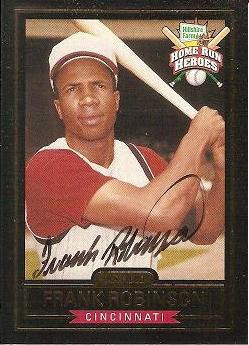 As for Dallas Green, he came and spoke at the Chester County Historical Society a few years back. I only remember two things Dallas said that night, one was that he completed a masters degree at University of Delaware and the second was he said "Wayne Gomes is not a closer". He was right.

PTBNL as I mentioned earliar had a big inning and I am going to have to sort all this out.
First up he got the single for getting the Frank Robinson auto so Utley Drives in Victorino. This is followed by Ryan Howard getting a big triple, must of been one of those towering pop ups that bounced off of the top of the wall (driving in Utley)- And then Howard comes home has the cutoff man throws wildly to 3rd base as PTBNL gets the Red and Green Bonus. 3 runs for PTBNL.

There was one other bonus to hand out as Night Owl found the 1974 John Ellis card. The Night Owl crew is doing a good job of working on manufacturing a run, coming through on their third bonus question. Night Owl was also inspired to create an amusing post on the cartoons of 1974 topps. Definitely check it out. With the bonus, the busy Matt Kemp has stolen 3rd.

Here is the rest of the John Ellis card: 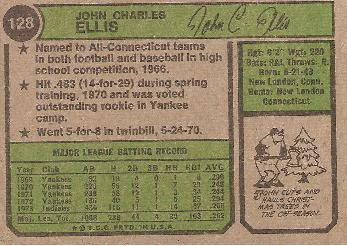 I do have a couple of questions for this weeks winners. 1) PTBNL, you sounded defeated but went back in there and figured out the Dallas Green auto, how'd you come up with it? searching ebay or going through old cards for facsimile autos? and Night Owl, did you know that cartoon was from 1974 topps?. Every time topps has the cartoons they are different but I don't know if I could pick out one year from another based on just the toon portion of the card.

I hope everybody enjoyed this weeks seasonal Spot the Sig! and it helped to get everyone into the holiday spirit. Next week will probably be a lot more basic.

Stop back Sunday night for the next edition of Spot the Sig!

I did know it was from '74 Topps, which made tracking it down a little easier.

I have the whole set, so I'm familiar with the look of the cartoons. I knew the year, but didn't know which card and had to go through a couple 100!

Thanks for the salute. Love to see Burrell cards on blogs. As for figuring it out, I was trying to guess the first name. I was thrown off because I thought the G was an L and I thought the first name was Darren. When I couldn't find an auto on ebay that fit that criteria, I searched for Dallas, thinking it was some obscure signature.

I was at a huge advantage on the Green auto too because I am a Phillies fan and because he and I are both from the same small Wilmington suburb, Newport DE. I would have been very disappointed in myself if I hadn't gotten that.

For the STS standings, I think I got shorted the runs I had going into this week.

You are Correct PTBNL. When Howard hit that long fly, I got so excited that I forgot that Utley had reached on the Frank Robinson auto, and never gave you credit for that run.

I knew there was to much going on in this one for me to keep track of everything.

The error has been corrected.

In my search for the bonus, I also discovered that Dallas Green was card #359 in 61 Topps and Frank Robinson was #360. I found it hard to believe that that would be the connection.