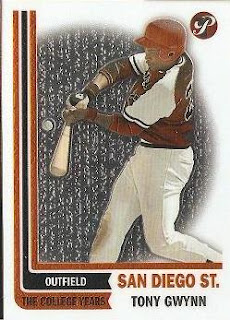 Tony Gwynn was inducted as a first ballot Hall of Famer in 1997. The honor was much deserved. 3141 hits, 319 Stolen Bases and a career average of .338. The batting average is the highest among all major league players whose careers started after World War II. During the 1994 season Gwynn batted .384 for the year, 3 hits shy of .400. He led the league in batting average 7 other times. Pretty impressive.

The 15 time all-star played his entire career with the San Diego. The Padres have gone to only two World Series', Gwynn was a member of both teams (1984, 1998).

I love these Topps Pristine cards, with players in their college unis - this year Donruss Threads also has an insert series dedicated to great players representing their colleges. This Gwynn card also mimics the 1983 topps set.

Gwynn has returned to his alma mater as their baseball coach. These days Tony Gwynn Jr is playing baseball in the Milwaukee Brewers organization, getting 130 games with the big club over the last 3 years. Gwynn also has a daughter Anisha Nicole who is an R&B artist. Her album is called "19", Gwynn's Uniform number. On the first song clip you can hear Tony congratulating Anisha on her 19th birthday.

Tony Gwynn is making a bit of a buzz over at Punk Rock Paint where they have recently featured the rare 1971 Topps Gwynn card which was discovered in Al Copones Secret Vault. And Cardboard Junkie is featuring a related contest.
Posted by deal at 9:23 PM