Charlie Manuel - Sportsmen of the Year - and New STS! Standings 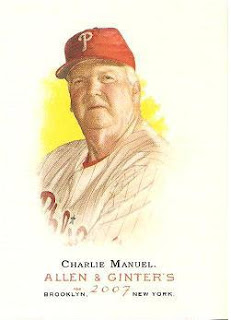 It has been a while since we have featured a Phil on Phungo and I also have not yet properly honored the man who led the team to its first World Championship in 28 years, Charlie Manuel.

This week Sports Illustrated awarded Michael Phelps as their 2008 Sportsman of the Year. The honor is much deserved, however, there are many great people in sports that will go unrecognized for their performances, SI scribe Tom Verducci is aware of this and has written a SI column to honor Charlie Manuel.

Verducci’s complimentary article stresses how Manuel has stayed involved in baseball simply for the love of the game and for that reason he is a baseball lifer. He is not a celebrity manager nor does he want to be one. He spent 18 years mentoring players in the minors before getting a shot to manage the Cleveland Indians in 2000.

Charlie Manuel had a short unremarkable career in Major League Baseball in the States but
became a star in Japan where he earned the nickname “Aka-Oni“ (the Red Devil) for his red hair and tenacious style of play. During his six-year Japanese career Manuel won an MVP award and set the league record homers hit by an American. While in Japan Charlie learned to speak the language and now he uses that skill when communicating with his Japanese players.

He has managed in since 2005, leading the Phillies to the division crown each of the last two years. He led the Cleveland Indians to an AL Central crown in 2001. Oh and by the way he will now and forever be known as the Skipper of the 2008 World Champion Phillies.

During the off-season I am going to attempt to feature a posting for each of the members of the Phillies 2008 World Series Squad. This is the first of the World Series Postings.

We now move on to other business and the Spot the Sig! game status after round 3 in which a Player To Be Named Later PTBNL has joined the game with a double by Identifying J R Towles Autograph. PTBNL then stretched the double to a triple by getting the bonus question for an extra base. The final two answers to the bonus question regarding catchers for the Phungo Fantasy squad were Miguel Montero and Chris Coste. Tough break for Night Owl whos suspected it might be a Phil and Kudos to Cardboard Addiction who guessed the catcher I wanted in the draft Geovany Soto. If I had him maybe I would not have finished 6th out of 10 teams. Okay enough babbling here are the standings.

Cardboard Junkie - Braves - 1 Run in - Man on First
PTBNL - I think repsresentin the Phillies - Jimmy Rollins on Third with a stretch Triple.
Stats on the Back - Stinkin Mets - Man on 2nd
Cardboard Addiction - Bosox - Man on First
Night Owl - Dodgers - Man on First

Kemp is getting to know the first base coach real well. They've just exchanged vacation photos.

Thanks for the write up on Charlie. Being in Houston, I don't get the see the Phillies play very often so I don't have much of an impression of him as a manager. I was impressed by his work during the playoffs this year.

Manuel gets pretty mixed reviews locally - he is often ridiculed for his in game decision, and praised for his handling of players. I think it is somewhere less extreme on both fronts. During the 08 Playoffs he did manage as well as he ever has during a one month stretch though. But that is easy to do when your players produce especially your bullpen.

I think Charlie's waaaaay underrated as a baseball manager. All he does is win. I think he's one of the good guys in baseball.