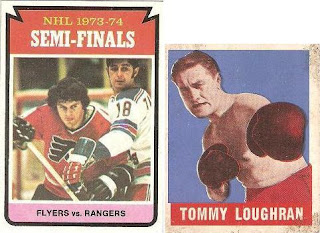 This is the Boxing Day edition for the Phungo salute to the Philadelphia Sports Hall of Fame 2008 induction class. Today we honor Tommy Loughran, Fred Shero, and Stan Hochman.

Tommy Loughran is the only one that actually is a boxer. He compiled a 96-24 record with 17 wins via knockout. He won the Light Heavyweight title in 1927 and was named Ring magazines Fighter of the Year for 1929 and 1931.

Stan Hochman is also connected to boxing via a cameo appearance in Rocky V. He probably prefers to be remembered for his writing. Hochman is currently a sportswriter for the Philadelphia Daily News, I know Hochman primarily for his appearances on a local sport panel talk show “Daily News Live’. Hochman is a great tie to Philadelphia’s sports past and has incredible stories about the Phillies of the 50s and 60s. Hochman’s expertise is not limited to the field of sports as he can also give thoughtful commentary on subjects in the arts such as, literature, theater, food, and jazz.

Fred Shero isn’t a boxer but he certainly can be linked to fighting. He was the head coach and leader of the Philadelphia Flyers from 1971-1978. The Flyers of the era were known for their rough and tumble style. Shero's legendary “Broad Street Bullies” won the Stanley Cup in both 1974 and 1975 . The 1976 team, which bested the Russian Red Army team 4-1 in a much remembered game, were also honored in a Simpsons "Treehouse of Horrors" Episode .

“Win together today, and we walk together forever”