Ok so the Tar Heels are NOT in the Final Four, and Neither is Villanova so I am barely paying attention. Regardless I do enjoy the 3 week tournament for several reasons and College Hoop is probably my second favorite sport outside of baseball.

A few years back after North Carolina won the 2009 NCAA Championship, Upper Deck jumped on the bandwagon and put out a small set honoring the schools basketball program.

Here are the highlights from a single blaster Jeff Lebo gets the cover for today's posting. He played High School basketball in my area during the same era I was in school and is at least part of the reason why I root for the Tar Heels despite them being one of the evil empires of college hoop.

Once you get past the fact that over half of the card is used for logo and design elements, it is a decent looking card. Trouble is looking at 50 of these and you realize that the pix look like slightly oversized windows icons.

As noted above there are coaches included in the set, pack #1 included Roy Williams. Lennie Rosenbluth was drafted 6th overall in 1957 by the Philadelphia Warriors, back when they represented the city prior to the 76ers coming over from Syracuse. The first pick of that draft was Former Laker player and Utah Jazz Play by Play announcer Hot Rod Hundley how died recently - Frank Deford had a great portrait of Hundley on NPR.

Each packs is 8 cards one of which is an insert. The center card above is from the 20 card Carolina Basketball Museum Insert.

The base set consists of 83 cards of UNC players and coaches presented in roughly chronological order.

The Wrapper features Michael Jordan, who also appears on card just a few times. Part of the draw for the Hobby Boxes is the possibility of getting a Jordan Auto. There is no guarantee of an auto in the blaster. 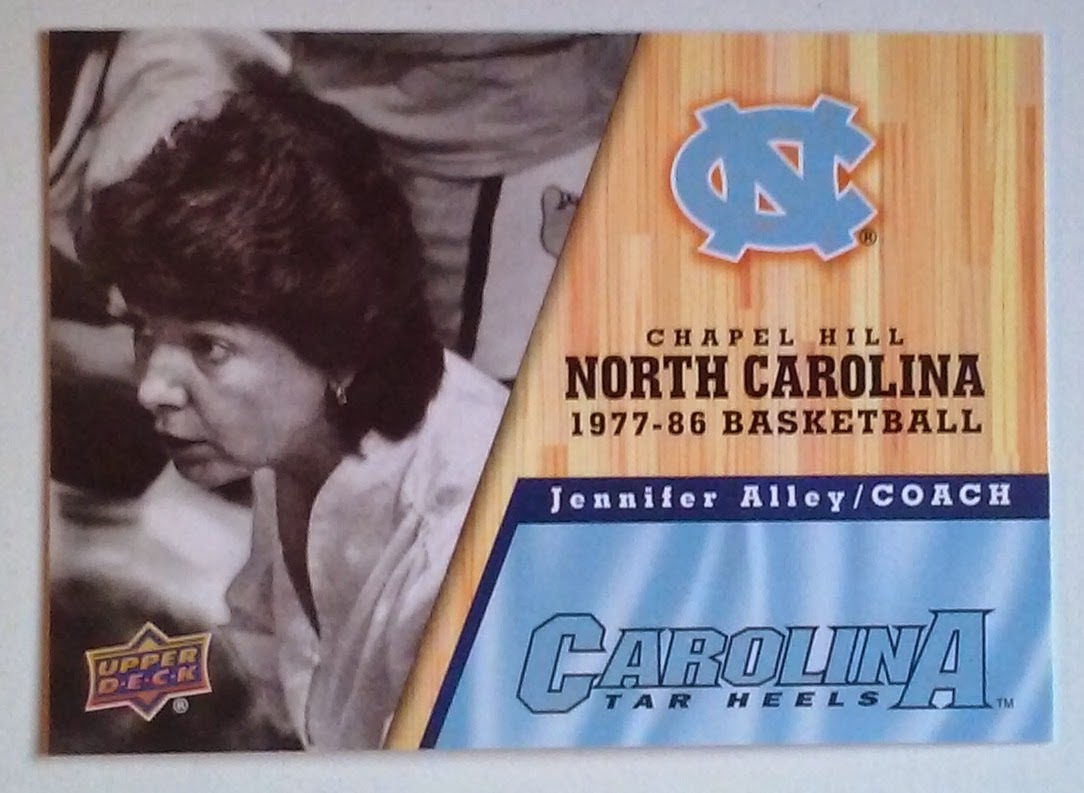 In addition to a his Base card (#43) Michael Jordan gets his own 20 card insert. Each card in the Jordan set has a 1/1 autograph parallel. There are 14 cards in the Rivalries subber. James Worthy is featured here with Clemson's Larry Nance. 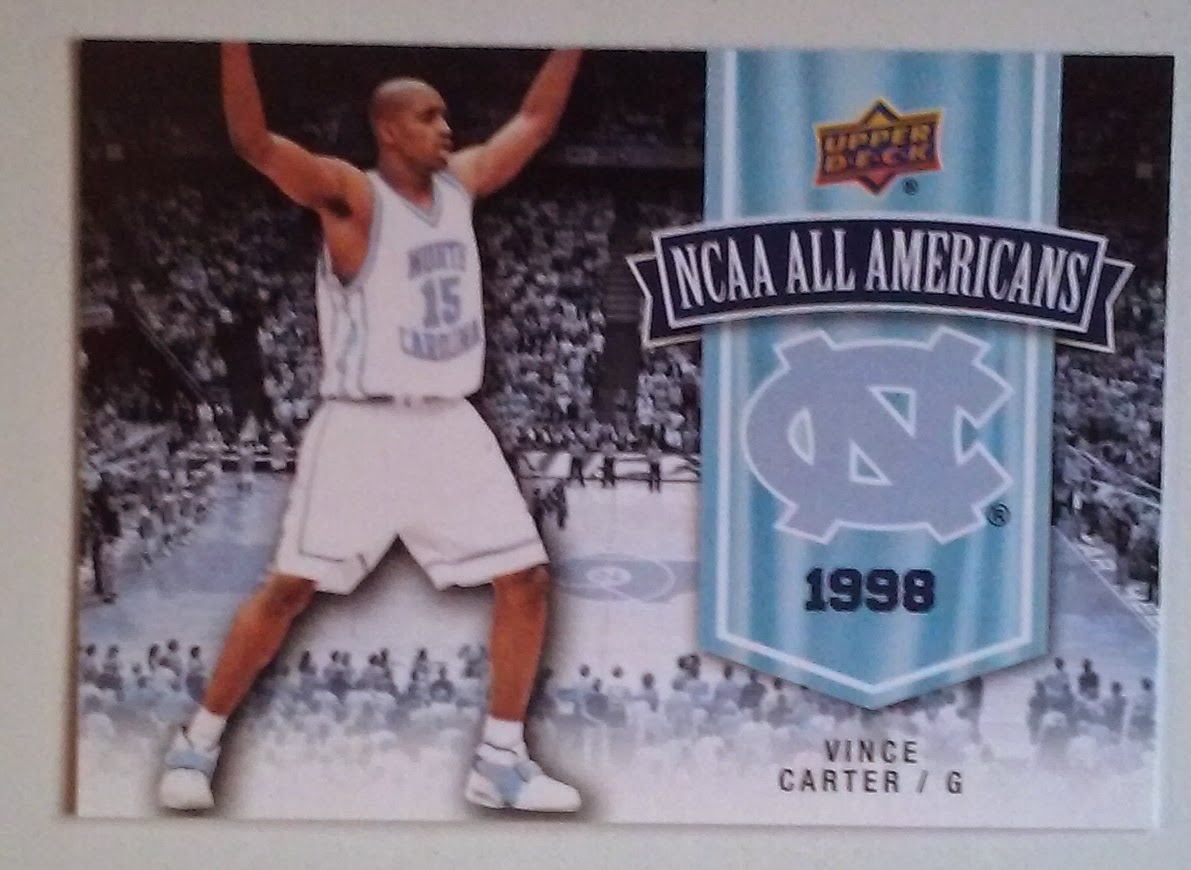 There are 20 All-Americans honored in the set which functions as a template for a limited number of autographs. 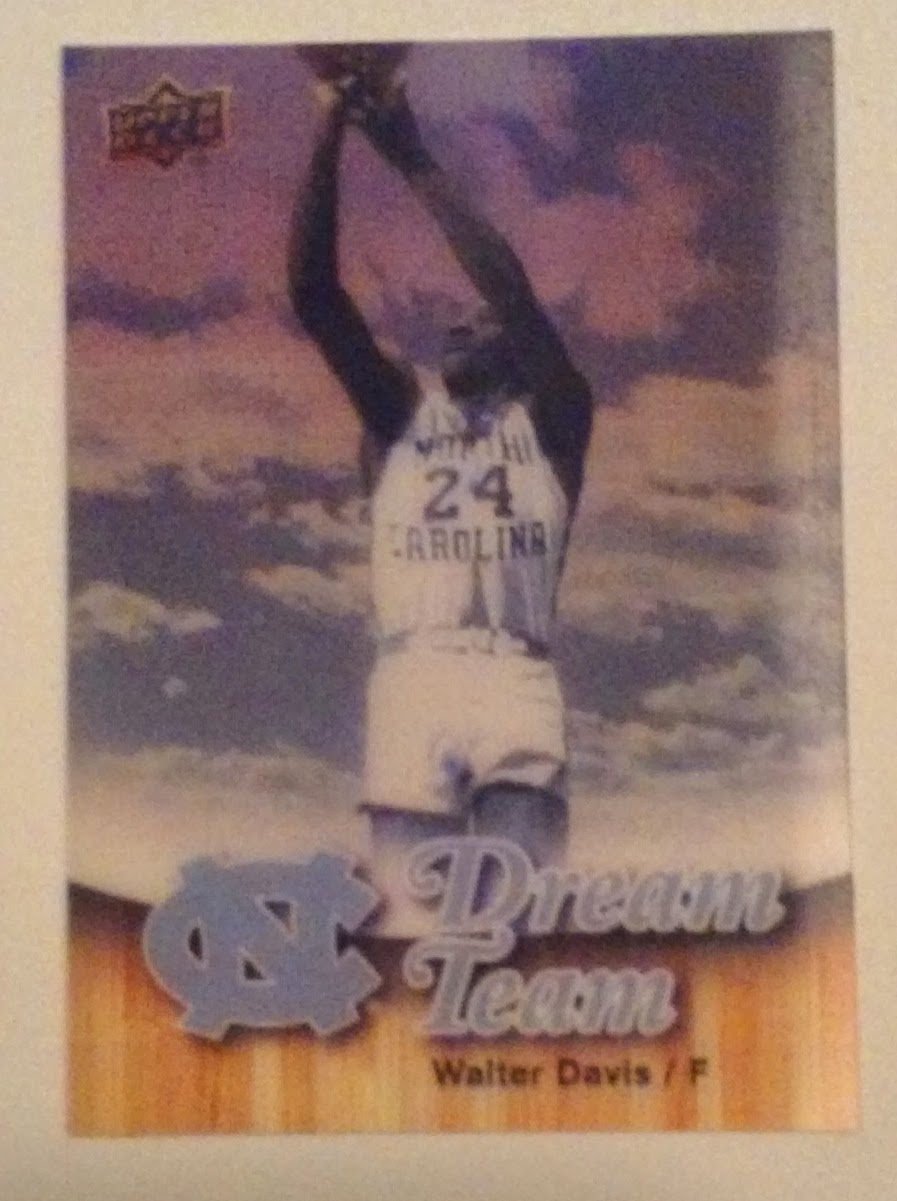 Dream Team is a 25 card insert set with each card having a slight 3D effect. Here we have Lennie Rosenbluth again. Timelines is a 20 card subset and is another Auto Template set.

The b-side contain a short bio on each player, which is nice except....

Every single card has the same blurb about North Carolina Basketball

Rather than contain a 1/1 Michael Jordan Auto, each blaster contains one of five Manupatch Banners that represent the each of the Tar Heels National Championships. On the plus side, 1982 Was the Jordan Championship.

By The Numbers
I think this box was less than $5 or possibly was my free gift on a Dave and Adams purchase. They are currently running at $10 for a blaster of Ten 8-Card packs.