As part of their Opening Week festivities the Phillies will salute their 1915 team which the franchise first National League Pennant Winner.

The Phillies will honor the 1915 team by wearing throwback caps from the era as will their opponent the Boston Red Sox. The then pre-curse Red Sox were the AL rep the Phillies faced in 1915.  The Phils are also offering fans free mini pennants as part of the festivities

Also found out that the first pitch will be thrown out by a former President....

Woodrow Wilson, well actually by an impersonator. Woodrow Wilson was the President when the two teams faced off for the 1915 Series.

I sincerely doubt the team will be able to bring back any living alums for the event. 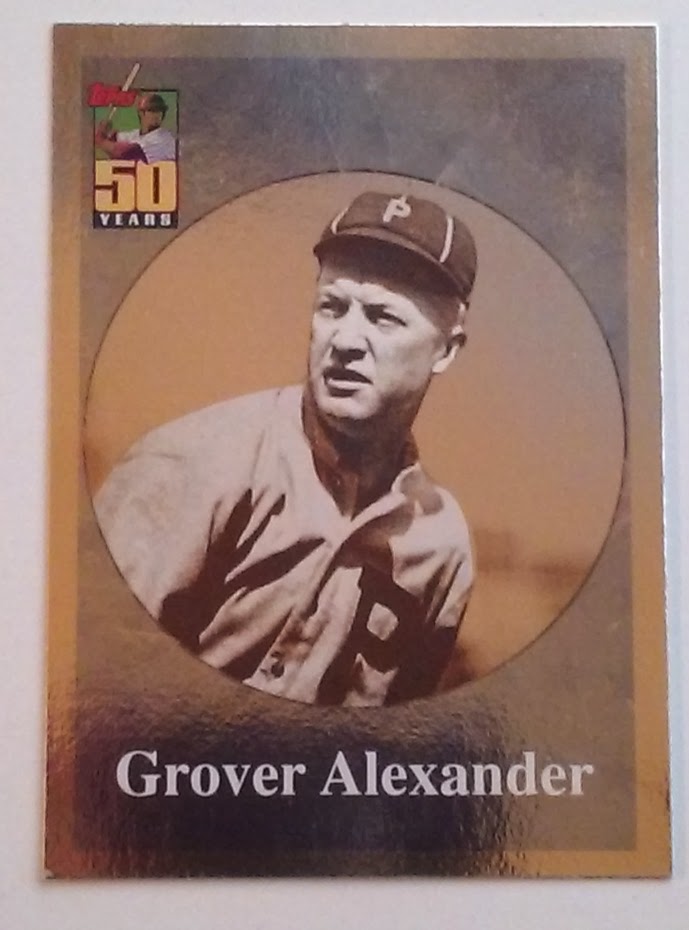 2001 Before there was Topps #BT9 Grover Alexander

The 1915 Phillies had Three Hall of Famers on the roster, the most prominent of the troika was Pete Alexander who also went by his birth name Grover Cleveland Alexander. According to his SABR bio by Jan Finkel Alexander is the only baseball player to be named after a President who was also played by one on Film (Ronald Reagan).

Pete Alexander recorded the only Win for the Phillies in the 1915 World Series and prior to 1980 he had the only Series Victory in franchise history.

While he came up short as a member of the 1915 Phillies, Alexander did eventually win a World Series ring at age 39 as a member of the 1926 St Louis Cardinals. He was the key pitcher for the Redbirds notching two complete game victories and posting a 2 inning save in game 7.

The Right Handed Ace spent eight of his 20 major league seasons with the Phillies, for whom he pithhed 190 of his 373 career victories. Alexander Led the league in Ws and Strikeouts six times each and ERA four times.  Advanced metrics were of course not used at the time, but he stacks up well there leading the NL in WAR five times and six times for pitchers.

In 1938 Alexander became the 9th player enshrined in the Hall of Fame. Grover Cleveland Alexander died in November of 1950 at the age of 63.

2001 Before there was Topps
Topps BT is an insert set featuring 10 players who played prior to Topps baseball cards. Alexander is the sole Phillies player in the set that features the true icons of the game - Babe Ruth, Ty Cobb, Christy Mathewson etc.