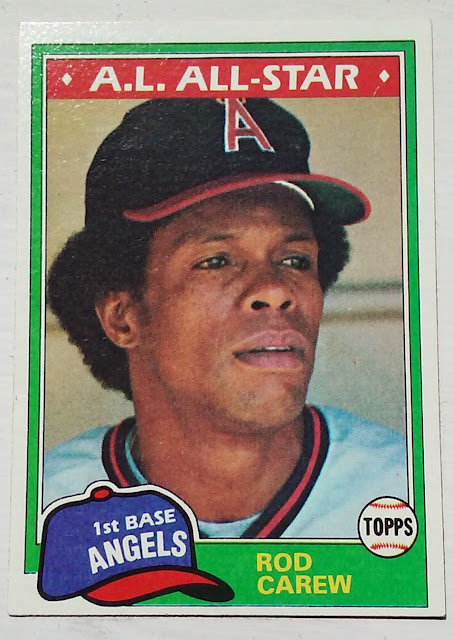 Rod Carew spent seven of his 19 seasons with the California Angels. While his best years were behind him by the time Carew got to LA, he still was an important contributor to the team. Carew was a member of each of the Angels first two playoff clubs (1979, 1982), and represented the team in six All-Star games. A hitting machine Rod Carew ranks 2nd among all Angels in both Batting Average (Vladimir Guerrero .319/.314) and On Base Pct (Mike Trout - .395/.393).

The Angels retired Rod Carew's #29 on August 12th 1986. He was the first player to be so honored by the club who had previously retired the #26 for owner Gene Autry (26 was chosen to symbolize the 26th man)

Of course it is the entire career of Rod Carew that makes the Panamanian born infielder a Hall of Famer. He earned an MVP and Rookie of the Year award with the Twins while racking up 2082 of his 3053 career hits (Ranks 23 in MLB history).

1981 Topps
This is Rod Carew second Topps base card as an Angel. 1981 was the fifth time that Topps awarded Carew a Hero Number, an honor they would bestow on the hitter 10 times during his playing career. 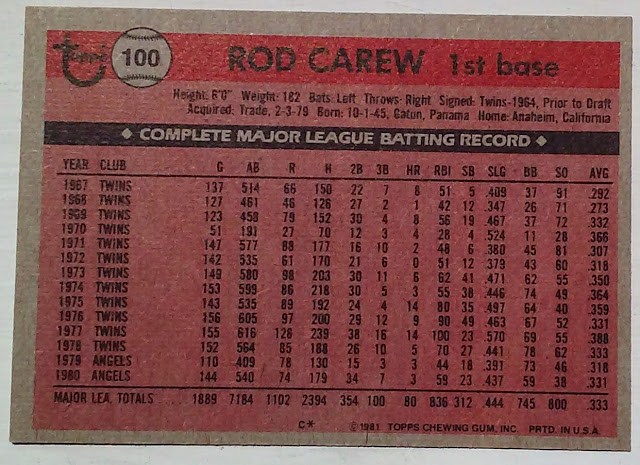