Blog Bat Around - Centerpiece of the Phungo Collection

I am late again but feel good about posting this on Christmas Day. This is my second blog bat around, my first is posted here. 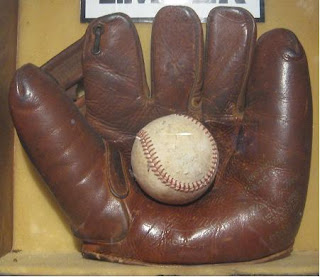 This is my Grandfather's first baseball glove. He gave it to me as a birthday present in my early teens. My grandfather said he bought it in 1941. I never thought much about this till his death in 1997. It then occurred to me that my grandfather would have been 26 in 1941. That's hard to imagine. My grandfather was an avid baseball fan and by accounts a decent athlete. I don't really know if sporting equipment was readily available in rural Pennsylvania in the first half of the 20th century. I gather in 1941 everyone, my grandfather included, was coming out of the great depression. Prior to that a person of his means probably had no way of earning the money to buy luxury items.
1941 is also the year that Ted Williams batted .400 and Joe DiMaggio had a 56 game hitting streak. I don't know what constituted a media frenzy in 1941, but I am curious if the baseball glove may have been a popular item that summer due to the accomplishments of DiMaggio and Williams.
The following summer my own father was born, the first of 7 children. Perhaps back in 1941, in that brief time between the depression and and impending fatherhood, my grandfather was able to enjoy a carefree summer on the sandlot.

My Grandfather's first baseball glove. The pride of my collection.

Happy Holidays to everyone from Team Phungo.
Posted by deal at 1:34 PM

Email ThisBlogThis!Share to TwitterShare to FacebookShare to Pinterest
Labels: Bat Around, Essay

That's a great glove and story. I couldn't tell from the picture, but do you have that framed and mounted? It looks awesome.

My grandfather did that too. He put it in a old desk drawer and put glass over the front. It looks really nice.