I would like to close out the year by having a series I will refer to as Phungo Readers Salute. This is my way of thanking Phungo readers for stopping by, checking stuff out, and making this whole blog worthwhile.
I will start by recognizing fellow Phils fan Cliff at Capewood’s Collections. Back in July Cliff became the first of my regular readers, which was pretty cool since his site was one that I was familiar with and he was a Phils fan.

Capewood’s Collections is based in the Houston area so in addition to covering the Phils also covers the Astros. Cliff also comes through with music videos, movie reviews, bonsai trees and more. Capewood appeals to my interest in card sites that are more than just card sites. Cliff, thanks for your input and support and keep up the good work over at Capewood's Collection. 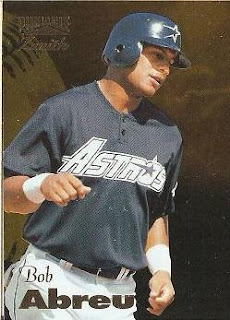 Since Capewood keeps us updated on both the Phillies and Astros, I have posted one of the few cards of Bobby Abreu in an Astros uniform. The obvious choice here would probably be Brad Lidge, but I am saving him for a future World Series Profile.

Yes Bobby Abreu was an Astro for about half a season a long time ago and now he is a Yankee. To me at least part of him remains a Phillie. He took a lot of heat in Philadelphia for spotty defensive play and not producing in the clutch. For me the criticism was a bit harsh. He played every day for the Phils for 8+ seasons consistently hitting .300 with a .400+ OBP. He’d also throw in 20 dingers, 100 RBIs and 30 Stolen Bases. Abreu is now a free agent, he spent this past season batting in the 3-Hole for the New York Yankees. I think he will do ok in the market.

PTBNL won Spot The Sig! for the second week in a row, and once again hit the bonus. I sure would like to know how he picked out Russ Martin last week. I don't think I alluded to Martin in a previous post, but I may have.

All that is good for a Shane Victorino Double for PTBNL which scores Jimmy Rollins from third. The run ties PTBNL with Cardboard Junkie for the STS! lead. Victorino advances to third on a stolen base for the bonus. Stats on the Back and Night Owl both get their own stolen bases.

PTBNL - repsresentin those Fightin Phillies - 1 Run in - Victorino on Third

Stats on the Back - Stinkin Mets - Man on 3rd

A Cardboard Problem has gotten the Yankees into the game, they remain on Deck, but I would never count out the Bronx Bombers.

Team Phungo is on vacation this weekend and I got bunches of stuff to do to get ready, therefore I am holding the profile portion of the Bob Feller STS! post for Hall of Fame Thursday.
Posted by deal at 9:36 PM

I just guessed my fantasy team catcher. I figured you probably had one of Martin, McCann, Chooch, or Soto.

yeah I wanted Soto - had I gotten him instead of Montero, I might have actually been in the money this year.

Martin held his own though.

Thanks for the glowing praise!

I always though that Abreu was a good pick up or the Phillies, especially considering they got him for Kevin Stocker.