Today’s Phungo Readers Salute goes out to a couple of Mets fans that are good enough to stop by here. I don’t know what it is but despite the fact that we are sending out largely Phillies content, we have a couple Mets fans that visit pretty consistently.

I really enjoy Sports Locker - JRJ posts a lot of interesting information on cards and memorabilia. Yes He is a fan of the Mets but we will forgive him. Sports Locker has a background in the Jersey area so there is also the occasional Philadelphia related post.

The Mets stuff and too bad, but the Cowboys info get a little hard to take.

Mark runs Stats on the Back and is attempting to collect a card of every Met. Best of luck with that, I think some of those late 70s teams may have went through a lot of players that never got cards. He is also an active member in the Spot the Sig! contest and has scored a run to move into a tie for first place.

Finally I want to mention Paul’s Random Stuff, who occasionally drops in a comment here. This sometimes confuses me, since my name is also Paul and I am easily confused. PRS features a nice array of Mets cards, info, and lots of Autos.

There were a couple of different directions I could of gone here, I will save both Phils and Mets fans some anguish and not post a Billy Wagner card. Instead I will post a card of a different reliever who may be the only player to contribute to both a Mets and a Phillies World Championship team, Tug McGraw. 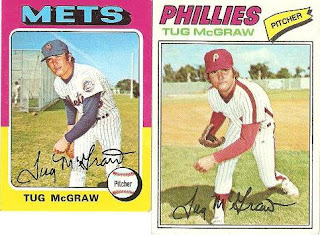 
These two cards are interesting when placed side by side. The Photos both feature Tugger in roughly the same pose, and they both appear to have been taken at spring training facilities. What really separates the two pictures is the uniform.

Regardless of the team he played on, I think most people think of Tug McGraw as one cool dude. I saw McGraw speak once at a local historical society. He was very funny and amusing as one can imagine. It’s unfortunate that McGraw died so young, but I am glad I was able to enjoy his career and his humor.

Tug McGraw – great guy, something both Mets and Phils fans can agree on.

You can't go wrong with Tug McGraw. :) My favorite card acquisition this year was a Tug McGraw certified autograph from Topps.

Thanks for the shout out.

The only other guy I can think of with a big following of both Mets and Phillies fans is Dykstra.

Oh and Endy Chavez. I love that little guy!

Roger McDowell won one with the Mets, then went to the Phils, but didn't win there.

Then did the unthinkable: He coaches for the BRAVES!!! Ugh.