The Tigers are on Sunday Night Baseball this week which is an excellent opportunity for Team Phungo to show off a nice recent purchase.

We have a card show circuit that runs on weekends at local malls. Often the selection is pretty poor and the trip can be a wasted couple of hours.

However occasionally you find something... 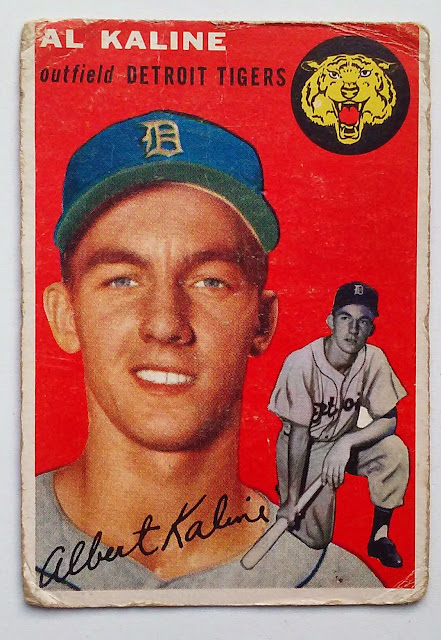 I first saw the Kaline RC a few weeks ago and wasn't sure if I was ready to take the big plunge into building 1954T, a set I have been slowly hoarding cards for over the last few years.

The nice thing about the card shows returning every week is that if I see a card week one, and I am undecided about picking it up I can think about it buy it the following week.

That is what happened here. I decided at some point during the week to pick up the card if it was still available. I also consulted one of the leading authorities on cards - Twitter.  I simply posted.


and I got one response


I would categorize that as an enthusiastic yes, and I appreciated the feedback. If I was on the fence, It felt good to know there was somebody out there as nuts as me - Even if it was just a ploy to get me to pick up a Aaron RC beater.


1954 Topps
This is a great set, I love the bright colors and the small B/W photo. Team Logos are prominent but not oversized.

Kaline is one of three prominent RCs in 1954 Topps, the other two are Hank Aaron and Ernie Banks. That is one of the primary reason I am considering building the set.

No one has to explain the specialness of the 1954 Rookie Card Class. All three are first ballot guys, Kaline and Banks both spent their entire careers with one club and they are identified as such, Mr Tiger and Mr Cub Respectively. 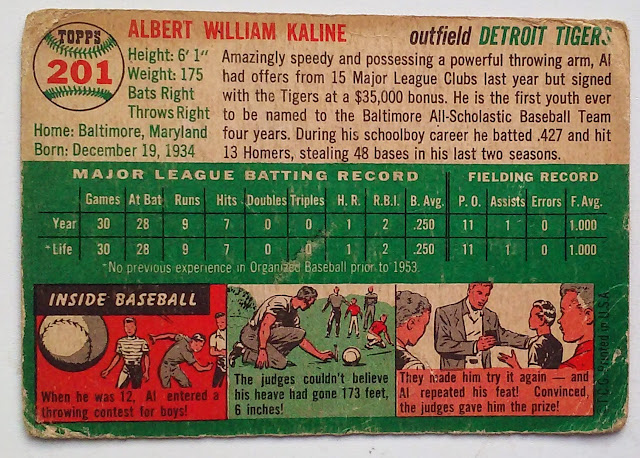 When this card was issued Kaline was just 20 years old. He was a bonus baby and went directly to the majors. His December 19 1934 birthday is likely the most recent in the 1954 set.

HoF profile
Al Kaline's 3007 career hits made him a first ballot Hall of Famer in 2007. His Credentials go far beyond that single number. The 18 time all-star Spent his entire career with the Tigers including the teams Pennant Winning 1968 season. He won a batting title in 1955, Led the league in slugging in 1959 and collected 10 gold gloves (Ranks #3 behind Mays and Clemente).  His 399 career Home Runs rank 52nd all-time.

Kaline never won an MVP award but he was runner up twice, both times to Yankees Catchers (Yogi in 1955, Elston Howard in 1963).  In each year Kaline at a higher WAR number then the winner but in neither year did he lead the AL in WAR.

Baltimore
I also wanted to note that Al Kaline has roots in nearby Baltimore where he was born and attended school. He was inducted into the Maryland State Athletics Hall of Fame in 1972, He was still an active im the majors at the time.