Now that we have  almost reached the 15th of May Maikel Franco can start his rookie year. 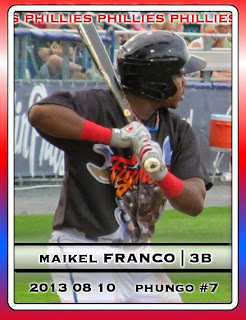 Do to MLBs weird rules involving rookie status and free agency Franco will soon join a group that includes Kris Bryant, Addison Russell, Austin Hedges, AJ Cole, Carlos Rodon and others. They are all making their Major League debuts this season or being held up an extra few weeks because they debuted in September of 2014.

After a hot start The Phillies opening day 3rd baseman, Cody Asche has gone cold. It appears Franco will become the everyday player and Asche will join the sketchy group of Phillies outfielders.

2015 WAR
Maikel Franco has been hitting well at AAA this season but he struggled in 58 plate appearances last year. When he does get called up he will be one of the 10 youngest players in the NL. I am thinking Franco will get enough playing time to get a glimpse at who he will be as a major leaguer and I think he will make positive contributions. Mark him down to +1.5 WAR in 2015.

Baseball-ref
Posted by deal at 7:11 PM