A few weeks ago we featured a column on an Angels combined no-hitter pitched by Mark Langston and Mike Witt. I have heard it suggested that the credit for a committee no-no be given to the Catcher. The man behind the dish that day was former Phils catcher Lance Parrish. 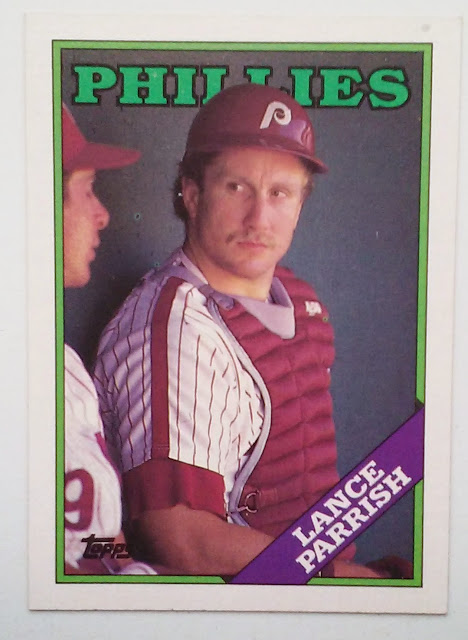 The Langston/Witt No-Hitter was not a first for Lance Parrish, in 1984 he had caught Jack Morris' gem as a member of the Detroit Tigers.

Somewhere between the between Jack Morris and  Langston-Witt Parrish spent a forgettable two seasons with the Phillies. In the five years prior to signing with the Phillies as a free agent, Parrish averaged 28 Home Runs a season. Compare that to a two season total of 32 Homers as a Phil. His batting averages for the two seasons were .245 and .215, yet somehow he was distinguished enough to represent the 1988 Phillies in the All-Star game.

Hall of Famer Gary Carter started the 1988 ASG, and was eventually lifted for a .215 hitter.

Finally, just to reiterate between the age of 21 to 35 Lance Parrish played for three teams, He caught No-Hitters for two of those teams. None of those teams were the Philadelphia Phillies.

Sources and Links
Year of the No-Hitter Index
Baseball-ref
Posted by deal at 7:11 PM