It was a tough assignment, Hedges first AB was a pinch hitting appearance versus 2014 World Series MVP Madison Bumgarner. The Rookie Struck out on four pitches.

I am sure there are better days ahead for the prospect who will likely get a start soon.

The 23 ranking by Baseball Prospectus may be a bit high as they have consistently ranked Hedges higher than Basemall America (who did not rank Hedges in the top 100 this year) and MLB.com. Perhaps it is because BP ranked Hedges a year earlier then the other sources.

2014 Fire Die Cuts
The FDC cards are inserted into 2014 Bowman Chrome. Apparently they are a common insert as I found this in a dime box. Hedges is found only in the insert set and not on the base checker for 2014 BowChro.

I may have seen these bizarre cards previously, but don't remember. They look like somebody shrinky-dinked a chrome card. The b-sides with the floating type are an absolute trainwreck 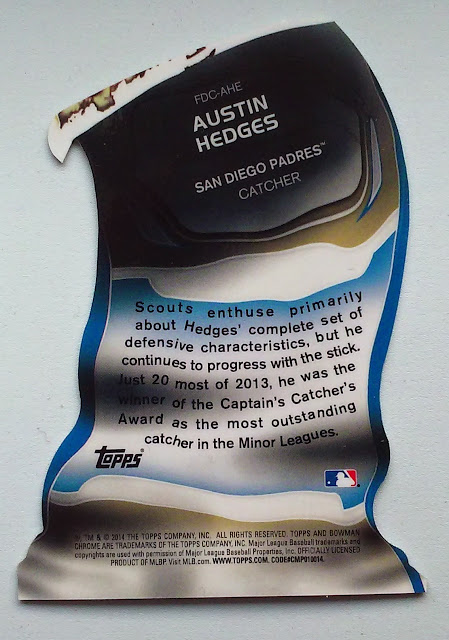 Maybe it is the wording, but I had to read this card a few times before I figured out what the author was talking about. The shape of the card on this side doesn't make me think of a prospect on fire, It looks like a the wicked witch in the Wizard of Oz Melting, "I'm Melting!!!" .