Woke up this morning to the sad news that NFL Kicker Garo Yepremian had died. 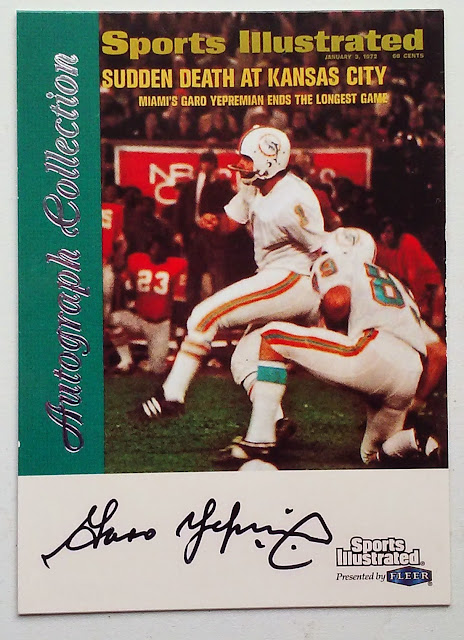 Garo Yepremian was the kicker for the undefeated Superbowl Champion 1972 Miami Dolphins. He is also known for an interception he tossed in that Superbowl that nearly cost the Dolphins their perfect season.

The above card features the cover of Sports Illustrated from the week that Yepremian kicked the game ending field goal for the longest game ever played. On Christmas Day of 1971 the Dolphins Beat the Kansas City Chiefs 27-24 in double overtime. Yepremian kicked a 37 yarder for the Divisional Playoff game victory 7 minutes and 40 seconds into the 2nd OT. The games total time was 82:40 outdoing the second longest game by about 5 minutes (77:54 Dallas Texans 20, Houton Oilers 17 - December 23 1962)

Garo Yepremian is not in the Hall of Fame, however he was elected to the 1970s All-Decade team by the HoF.  Strangely, the only kicker in the Hall happens to be Yepremian's opposition in the longest game, Jan Stenerud. During that 1971 Chiefs vs Dolphins playoff game Stenerud missed a 22 yard field goal at the end of regulation, that would have prevented the tilt from going into overtime.

Local Guy
I have no idea how Yepremian ended up here, but Garo Yepremian lived in the Philadelphia Area. I remember for a time he hosted a weekend fishing show on the NBC affiliate in Lancaster PA. He died at a hospital in Media PA, which is about 20 minutes from Phungo HQ. I believe the hospital is across the street from a mall where I have gone to a couple of card shows.

Brush with Greatness
This isn't my BWG story but was related to me by co-workers. A few colleagues of mine were out for a golf outing and needed an extra to fill out their foursome. They pick up a fourth and filling out the scorecard this conversation ensues:

Yepremian: "I am Garo Yepremian"

My friends said Yepremian was a good guy and wore a baseball cap that honored the undefeated season. The youngest guy in the group who is probably in his early 40s didn't know who Yepremian was.

Garo Yepremian Foundation
The Yepremian foundation was inspired by Garo's daughter-in-lau Debby-Lu Yepremian who at the age of 19 in 1998 discovered she had brain cancer. Debby-Lu outlived a six months to live prognosis by six years, passing in 2005.

Oddly Garo Yepremian's death was also to brain cancer, He had first learned his own diagnosis in May of last year.