Yesterday we featured a card for a no-hitter that almost happened. Today we have a card of the player that foiled the John Smoltz Attempt. 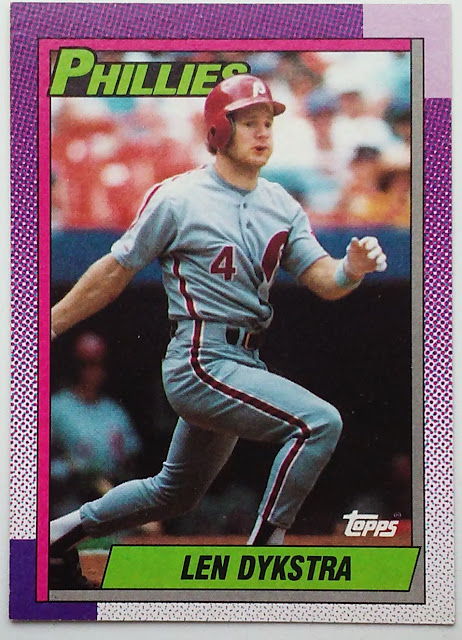 Lenny Dykstra broke up the No-Hitter by pulling a double down the right field line. Dykstra would eventually even score to end the shutout as well, but Smoltz held on for the 6-1 victory.

1990 Topps
This is the first Topps Base card to feature Lenny Dykstra in a Phillies uniform. Biggest oddity here is that he is Len rather than Lenny. He is almost always Lenny to me. If I am running off stats in a formal way I may say something like "In 1993 Len Dykstra led the league in both Hits AND Walks, That's tough to do".  More typically I would say, "Man I would love to party with Lenny Dykstra sometime, but I fear it would kill me"

According to the Baseball Card Database Topps issued a dozen base cards of Dykstra. He is not referred to as Lenny on any of them.

Sources and Links
1990: Year of the No-Hitter
baseball card database
Baseball-ref
Posted by deal at 8:11 PM